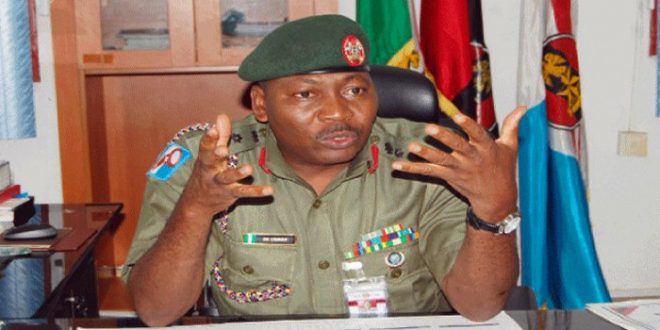 The Nigerian Army has announced that Exercise CROCODILE SMILE II will commence on Friday.

The Army said the exercise which will “span across three Divisions of the Nigerian Army, 2,6 and 81” is in line with the training of troops in the “conduct of Internal Security Operations.”

A statement by the Director Army Public Relations, Col Sani Usman, added that Exercise CROCODILE SMILE II was “based on Constitutional provisions.”
 
Recall that the Army had last year launched the operation in the Niger Delta region of the country.

The statement reads, “The Exercise, set to span across 3 Divisions of the Nigerian Army (2, 6 and 81 Divisions), is in line with the 2017 Training Directives which aims at training troops in the conduct of Internal Security Operations in aid of Civil Authorities across the various formations’ areas of responsibilities, based on Constitutional provisions.

“Additionally, with the operationalization of 6 Division Nigerian Army, earlier in the year, the need to exercise troops in an amphibious environment makes it expedient to hold Exercise CROCODILE SMILE II. Moreover, this exercise will complement the on-going Exercise EGWU EKE II in the South-Eastern part of the country.

“Let us not be quick to forget the scenario in which these exercises are carried out. EGWU EKE II became expedient due to the mindless assassinations (even in religious places), attack on security personnel, theft of weapons, armed banditry, kidnapping and cultism, among other security challenges. In a similar vein, security challenges in the South West and Niger Delta geo-political regions such as illegal oil bunkering, pipeline vandalism, cultism, kidnapping, militancy and other challenges are becoming rampant.

“The need for troops to sharpen their skills to cope with these security challenges within the 2, 6 and 81 Divisions’ Area of Responsibilities calls for the conduct of Exercise CROCODILE SMILE II. Also, in actualizing the Chief of Army Staff’s vision, which is to ‘To have a Professionally Responsive Nigerian Army in the Discharge of its Constitutional Roles’, accentuates the call for the conduct of this exercise in conjunction with sister services and other security agencies.

“This exercise will therefore be conducted with the involvement of other security agencies such as the Nigerian Police and Nigeria Security, Department of State Services, Nigerian Security and Civil Defence Corps, Nigeria Customs Service and National Drug Law Enforcement Agency, just to mention a few.

“Accordingly, Exercise Headquarters would be established in the field to facilitate open communication between members of the public and exercising troops. Emphasis will be placed on raids, cordon and search operations, anti-kidnapping drills, road blocks, check points and other amphibious operations. Community support activities such as medical outreaches will also feature prominently during the Exercise.

“In this regard, members of the public are enjoined not to panic on seeing the movement of military equipment and troops to staging areas as their safety and well-being is guaranteed at all times. The public is also requested to remain vigilant, security conscious and report suspected criminals who will likely flee the military exercise areas to find safe haven among communities.