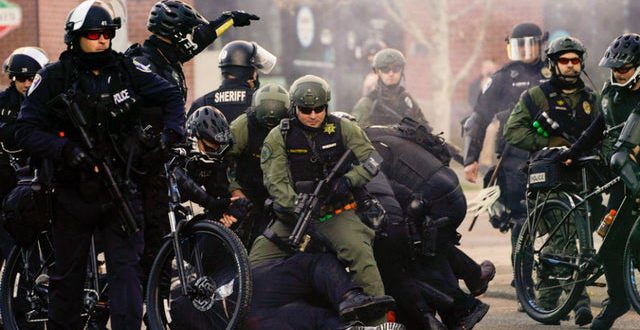 One person shot in Washington state during violent election protest

One person was shot on Saturday and three were arrested after demonstrators clashed near the Washington state capitol in Olympia.

The shooting came after supporters of President Trump protesting the election results and Black Lives Matter counter-protestors clashed near the state capital, The Olympian reported. Police said the groups were heavily armed with guns and clubs, according to The Associated Press.

“Both groups were heavily armed, including firearms,” said Lt. Paul Lower of the Olympia Police Department, according to the news wire. “They were fighting amongst themselves, two factions with opposing political beliefs.”

A suspect in the shooting was detained, and the victim was transported to a nearby hospital.

Two more people were arrested for suspicion of felony assault during the protests as well, according to The Olympian.

Officials said the conflict started in the streets and moved to the capital building. The shooting occurred while both sides were dispersing from the capital area, according to the AP.

Video from after the shooting shows a person on the ground while another man with a handgun walks across a parking lot, AP reported.

Police clashed with supporters of the president and counter-protestors during a similar protest in Washington, D.C. on Saturday. The pro-Trump demonstrators were also protesting the results of the 2020 election.

The protests come after the Supreme Court declined to hear a lawsuit filed by Texas seeking to overturn the election results in Georgia, Michigan, Pennsylvania and Wisconsin. The justices ruled that the Lone Star state did not have the right to litigate how other states conduct their elections.

Trump expressed his disappointment on Saturday, saying the court “let us down.”

Meanwhile, the Electoral College will meet on Monday to cast their votes, solidifying President-elect Biden’s win over Trump.