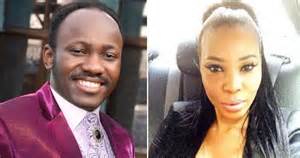 The General Overseer of Omega Fire Ministries Worldwide, Apostle Johnson Suleiman, has demanded Mr. Festus Keyamo to retract all publications, and tender an unreserved apology to him for orchestrating negative media publicity against him.

He also demanded N1bn over alleged blackmail and injuries inflicted on him, including online video clips, during his alleged amorous relationship with a Canada-based stripper, Stephanie Otobo.

Should Keyamo fail to comply with the demand, the cleric threatened to drag him to the Legal Practitioners Disciplinary Committee “for infamous conduct.”

It should be recalled that Stephanie Otobo had alleged that she suffered emotional stress from Suleiman, following a sour relationship including a promise of marriage.

But the cleric in a letter by his counsel, Osa Director, obtained by journalists on Thursday evening in Abuja, entitled: “Allegation of professional misconduct and unethical practices”, said Keyamo’s action was inconsistent with Section 1 of the Rules of Professional Conduct for Legal Practitioners 2007.

He said, “Sequel to our letter to you dated March 6, 2017, we have observed with shock and dismay your deliberate and relentless efforts to malign and convict our client through media trial. By your relentless media campaign, you are conducting yourself in a manner inconsistent with Section 1 of the Rules of Professional Conduct for Legal Practitioners 2007.”

According to him, instead of gathering facts and evidence before a court of competent jurisdiction for adjudication, Keyamo resorted to alleged blackmail and intimidation through the media, both traditional and social media.

“In short, you have threatened and indeed executed your threat of conjuring, manufacturing and synthesising bogus and unverifiable exhibits in the social media and newspapers, all with a view to poison public opinion against our client and reduce his esteem and reputation in the eye of any reasonable man. Your attitude is also to ambush a fair trial while litigation is anticipated. This is contrary to S.33 of the Rules of Professional Conduct For Legal Practitioners 2007.”

Director quoted a recent Newspaper report in which Keyamo threatened to “release more bullets”, while Otobo under his supervision would be organising a world press conference and “we will begin to release bullets.”

He said, “Furthermore, you grossly and recklessly maligned our client, saying, “these men of God are not what they claim to be, we have a duty to protect the public. Many of them are fake and fraudsters. You will see the video very soon in the next few minutes.” True to your threat of trial publicity stunts, the video clips have flooded the social media networks.

“We believe your conduct is inconsistent with the virtues and rules of conduct of the legal profession. It smacks of indiscipline and disdain for the judicial process. Therefore, we demand a retraction of all your press statements and an apology to be published on the major social media networks.

“Also, we demand a compensation of N1bn for all the injuries inflicted on our client. We expect you to meet our demands within seven days from the date above written. Take notice that we shall drag you before the Legal Practitioners Disciplinary Committee for the infamous conduct if you fail to so do.”