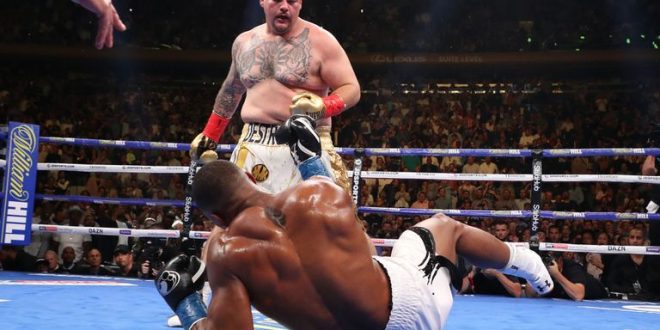 Oleksandr Usyk observed “strange” behaviour while he was studying Anthony Joshua ‘s previous fights ahead of their title bout in September.

And in the build-up to their fight, Usyk watched a lot of tape on Joshua, including his infamous loss to Andy Ruiz in the summer of 2019 that saw him drop his belts for the first time.

Ruiz stopped Joshua in the seventh round of their June 1 contest, and Usyk noticed while watching the fight back that Joshua was exhibiting some abnormal behaviours.

“Of course, me and my team pay attention to that,” Usyk told Forbes when asked about Joshua’s body language. “They observe and analyse.

“We try to make our observations work, I did notice that he was quite tired after the fight [with Usyk].

“I noticed that before the first fight with Ruiz, he looked strange. But I don’t think about why it happens.

“Maybe it’s for some internal reasons. I don’t want to think about the reasons.

“The hands on the ropes, it was not quite that unusual – there might be very different reasons for that.

“I was more surprised because he was kind of distracted, chewing on the mouthguard like he was.

“That’s why I thought it was strange, but everybody behaves in their own way.”

Issues behind the scenes with Joshua ahead of the Ruiz bout have often been alluded to, but he has never publicly disclosed what went wrong going into the fight.

Instead, he buckled down in camp, made the requisite changes and within the year had won his belts back from Ruiz in a dominant display in Saudi Arabia.

But he will face a much tougher test when he squares off against Usyk for a second time early next year.

For one, Usyk insists, he has not changed his lifestyle despite the fame and fortune that comes with being heavyweight champion, unlike Ruiz who ballooned in weight and struggled to maintain his drive after achieving his goal.

“My life has changed, but my rules definitely did not,” Usyk explained. “I still live by my own principles and standards.

“In terms of recognition, yes [his life has changed] – I’ve been in a couple of European countries after the win, and it’s been a lot more people coming up to me.

“My mental state was fine before the fight with Joshua as it was after, I always knew what I was working toward and I was going straight up to my goals.

“Of course, it can change, that’s how things are. The victory happens and people are changing their [perceptions], and it’s their right.

“However, I felt before Joshua that I would just keep working on my state of being prepared.”

Charles Igbinidu is a Public Relations practitioner in Lagos, Nigeria
@https://twitter.com/ionigeria
Previous Bodybuilder who Shot His Mother in the Head, Father in the Back on Christmas day arrested
Next Ronaldo, Fernandes and Maguire targeted after Manchester United poor performance against Newcastle