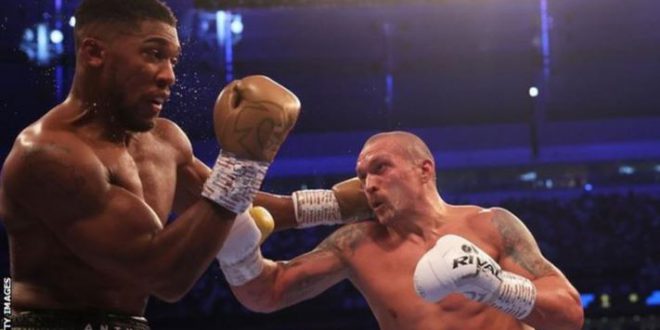 “Our rematch was specified in the contract. It has already been activated in principle, from the side of Joshua”; Oleksandr Usyk’s promoter wants second world title fight to be staged in Ukraine in February

Oleksandr Usyk’s team have announced that Anthony Joshua has ‘activated in principle’ a rematch clause and they hope Kiev will host the fight in February.

The Ukrainian star was crowned as the new WBA, IBF, and WBO heavyweight champion after his unanimous decision win over Joshua at Tottenham Hotspur Stadium on Saturday night.

Joshua had indicated he wanted an immediate rematch, saying at the final press conference: “100 per cent. 110 per cent.

“I’m ready to get back to training. Because of the 12 rounds, my lungs and everything, it was a good 12-rounder, so I’ll be in a good place when I get back into training to pick up where we left off.”

Usyk held a press conference with promoter Alexander Krassyuk, who appeared to confirm that Joshua had enforced a second fight

“The rematch was specified in the contract,” said Krassyuk. “It has already been activated in principle, from the side of Joshua.
“So I remember when we discussed with Oleksandr the issue of rematch, he was delighted and said ‘Wow, cool, I will beat Antokha (Anthony) twice.'”

The Olympic Stadium in the Ukrainian capital has been put forward as a potential venue for the rematch, although Joshua’s promoter Eddie Hearn has played down this suggestion.

Usyk said: “How does Hearn know that in February at Olympic stadium it is bad to box?

“Has he ever fought in February at the Olympic?”

Now a two-weight world champion, Usyk had warned that he could produce an even more dominant performance in another fight against Joshua.

“You didn’t see the best Usyk. I can be much better,” he said after his points victory.