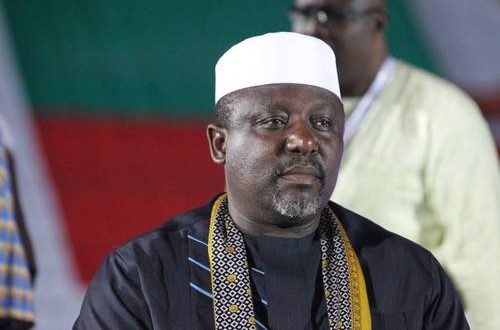 “Okorocha Is A Colossal Failure, The Worst On Earth” – Ohaneze Youths Council

The Ohaneze Youths Council, Owerri zone chapter, has concluded that Imo State Governor Rochas Okorocha has failed in fulfilling the promises he made to voters during his campaign.
The group lamented the governor’s monopolization of power in the state and accused him of installing his son-in-law, Uche Nwosu, as the next governor of the state.

“You can see the plight of Imo pensioners, where people are forced to forgo 40 percent of their pension. Everything is wrong with this government; this is the worst government on earth. Governor Okorocha is a colossal failure because he has failed in all his campaign promises,” the group lamented.

“The governor wants to go for an unconstitutional third term through his son-in-law; this is nothing but ‘Familiocracy.’ Where are the jobs and factories he promised to Imolites?”

The Ohaneze youth group argued the Owerri zone of the state has been marginalized by Mr. Okorocha, saying that it has not enjoyed the dividends of democracy.

“Failure of any party to zone its governorship candidate to Owerri zone will definitely result in the vandalization of the said party secretariats and a serious attack on the affected party secretariat staffs,” the Ohaneze youth council threatened.

The youth group also resolved to approach the court to seek redress and compensation on all injustice melted by the Imo State government and their agents against the people of Owerri zone.