Mr Frank Okiye, the newly elected Speaker of Edo House of Assembly, assumed duty at the assembly complex on Tuesday.

Okiye, who addressed newsmen at the complex, thanked members and the All Progressives Congress (APC) for the confidence reposed in him.

“l am happy and very elated. Edo people, my party and the members of the House have found me worthy for the position as the Speaker of the Edo House of Assembly.

“Am not the best, but this responsibility is divine,” he said.

The Speaker said other elected lawmakers, who were not at the inauguration ceremony, would be inaugurated as soon as they completed their documentation processes.

According to Okiye, “we adjourned sitting till July 17, 2019 to enable us do some administrative work, allocate offices to members and get the system to function well.

“My expectation for the seventh assembly is that we will strive to make laws that would be of immense benefit to Edo people,” he said.

Okiye promised to work harmoniously with the state governor to deliver the dividends of democracy to Edo people.

The Clerk of the House, Yahaya Omogbai, on Monday inaugurated nine out the 24 members-elect.

Omogbai, who ushered in the lawmakers into the chamber, read the letter of proclamation transmitted to the office of the Clerk by the Executive Governor of Edo, Mr Godwin Obaseki.

After reading the letter, the clerk proclaimed the seventh assembly and members began the process of electing the House leadership.

Meanwhile, there was heavy presence of security personnel at the entrance to the assembly complex, while staff of the assembly went about their normal duties.

19 of the 24 members-elect, had on Monday, called on Gov. Obaseki to inaugurate the seventh assembly following the expiration of the sixth assembly on June 7.

The lawmakers, who made the call while briefing newsmen in Benin, said they would resist any attempt by the governor to impose the leadership of the House. 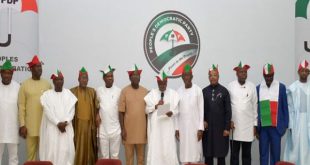