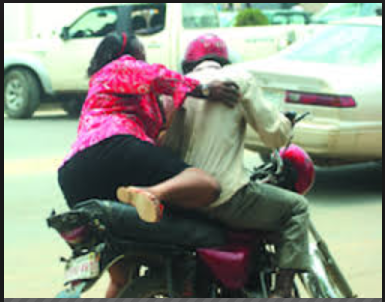 A 26-year-old commercial motorcyclist, Lateef Sanni, was on Thursday remanded in Kirikiri Prisons on the orders of an Ikeja Magistrates’ Court after pleading guilty to robbing his passengers of N650,000.

Sanni, who lives at No. 5, Olorunfemi St., Igando, a Lagos suburb, is facing a two-count charge bordering on robbery.

Following his guilty plea, the Magistrate, Mrs. I. O. Raji, said the accused be kept behind the bars pending sentence at the next date of adjournment.

Williams told the court that the accused robbed the complainants, Mojirola Bashiru and Demonyoji Mary, of their handbags containing N620,000 cash and a Techno phone valued at N30,000.

“The accused rode his motorcycle with the complainants on it into the bush and robbed them of their valuables.

“The complainants raised alarm and with the help of passers-by, the accused was apprehended,” the prosecutor said.

She said the accused had been convicted of robbery but was released sometime in December 2017 from Kirikiri Prisons.

According to her, the accused also stole the motorcycle he used for robbing the passengers.

The News Agency of Nigeria reports that the offence carries a penalty of 21 years’ imprisonment, according to Criminal Law.

The magistrate fixed April 12 for sentencing.

Previous Man Charged To Court For Stealing His Neigbour’s Fowl For Easter.
Next My Husband Is A Ritualist, Wife Alleges After 25-Year In Marriage