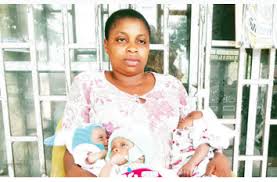 A 44-year-old man, Paul Edobor, has allegedly abandoned his wife after she was delivered of triplets in the Esan North-East Local Government Area of Edo State.

It was learnt that Paul, a commercial motorcycle operator, fled his home in Uromi when his wife, Ugomma, had the three identical baby girls.

He was also said to have ignored phone calls from his wife, whom he married 12 years ago.

Ugomma told PUNCH Metro on Tuesday that her husband had lamented his inability to cater to the triplets as he struggled to take care of the two children she already had for him.

She said, “My husband ran away because he could not take care of the babies. I had my antenatal care in a hospital. But I put to bed at home.

“He left me when I was in labour. After I had the babies, I called his telephone, but he refused to pick the calls.”

The nursing mother, who hails from Abia State, lamented that her husband’s absence had left her and the children stranded.

She noted that she had been living on alms from kind Nigerians.

She appealed to her husband to return home, saying he had been forgiven.

Ugomma said, “People have been the ones helping me to buy baby things. I have been going to markets and churches with the babies to beg for alms.

“Wherever I go, people thank God for giving me these babies. I want my husband to come back to me. I have forgiven him. We were married in the traditional way; there is no going back.”

She appealed to the state government to also come to her aid.

“I want the government and good-spirited individuals to come to my aid to enable me to take care of my babies,” she added.

Charles Igbinidu is a Public Relations practitioner in Lagos, Nigeria
@https://twitter.com/ionigeria
Previous Strange: Corpse Refuses Burial
Next Crime: “I Slit Her Throat With A Jack Knife”