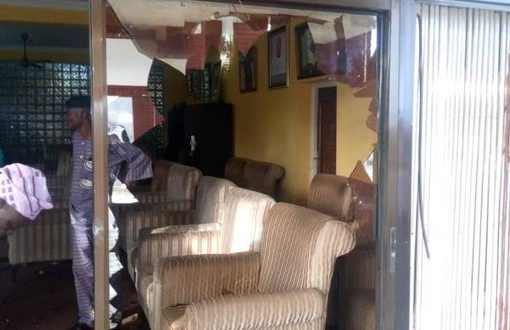 Three people have been allegedly killed during a violent attack on the palace of Soun of Ogbomoso, Oba Jimoh Oyewumi Ajagungbade, by some angry youths on Sunday.

The attack was said to have been carried out on the palace of the king by the youths as a result of the attitude of the monarch to the death of one Isiaka Jimoh who was shot dead during the EndSARS protest that took place in the town.

The attackers also disrupted a meeting between the Minister of Youth and Sports Development, Sunday Dare and the Soun of Ogbomoso, Oba Oladunni Oyewumi.

However, security operatives rescued the minister, the monarch, and other chiefs who were at the meeting.

While confirming the report, the minister in a series of tweets lamented that the hoodlums destroyed properties in the palace.

Ogbomoso-Hoodlums, thugs & miscreants distrupt stakeholders meeting in Soun’s palace now-invading, stoning and breaking doors, glasses. Soun, myself and council chiefs were scurried into safety by the police and DSS. Ogbomoso youth are law abiding. But hoodlums have taken over ..

The hoodlums broke into the palace and destroyed chairs, overturned tables, broke windows. These were not Youth or Students. These were miscreants and thugs who saw a window of opportunity in the protest which since abated. Thankfully.Soun, the chiefs, leaders of Parapo are safe pic.twitter.com/B00XvMNZBl

A combined team of operation Burst from Ibadan and a unit from Iliorin are now on ground in Ogbomoso to help keep the peace, protect the peaceful and innocent and also stop criminal elements.Soun of Ogbomosho yesterday and today personally appealed to this group to stop violence