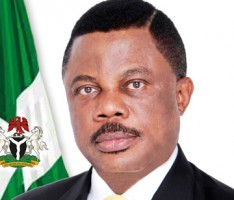 The Indigenous People of Biafra on Tuesday said the Anambra State Governor, Willie Obiano, lied against its leader, Nnamdi Kanu, about his claim that its leader had exonerated him(Obiano) from the killings of some pro-Biafran agitators at Nkpor, near Onitsha in 2016.

The group insisted that the governor was allegedly culpable in the death of the victims.

A Senior Special Assistant to the governor on Media, Mr. James Eze, had in a write up in some national dailies said that  Kanu had in a visit  to a traditional ruler in the state absolved the governor of the allegation.

But in a statement in Awka by the Media and Publicity Secretary of IPOB, Emma Powerful, the group dissociated Kanu from what it called “the concocted story”  going the rounds.

The statement said, “We the members of the Indigenous People of Biafra, worldwide under the command and leadership of Mazi Nnamdi Kanu disassociate our leader Mazi Nnamdi Kanu from the purported and concocted rumours going the round the city that during his (Kanu’) visit to Eze Eri Eze Chukwu Emeka of Aguleri that he exonerated Chief Willie Obiano the Governor of Anambra State from the massacre of IPOB members and Biafrans at Nkpor on the 29th and 30th of May, 2016 during the remembrance day celebration.

“We want to make it categorically clear that the  IPOB leader did not exonerate Obiano but instead indicted him for not halting the massacre as the chief security officer of the state and also for reporting to the kangaroo Army Board of Enquiry that nobody was killed at Nkpor and Onitsha head bridge when there were innumerable eyewitness accounts backed up by video and pictorial evidence; the evidences were presented to the well recognised international human rights organisations in the world like Amnesty International and Human Right Watch etc.

“To put the record straight, we are aware that Governor Obiano did not kill anybody by himself or fired anybody with bullets but as the number one citizen and chief security officer of the state he is culpable for not rising up on time to stop the massacre of those that campaigned vigorously for him in 2014 rather he came up through his information commissioner condemned and tagged the innocent civilians who gathered to celebrate their fallen heroes and heroines during the war of genocide against the people of Biafra in 1967 and 1970 as miscreants and hoodlums who came to destroy the state, it is on record.”