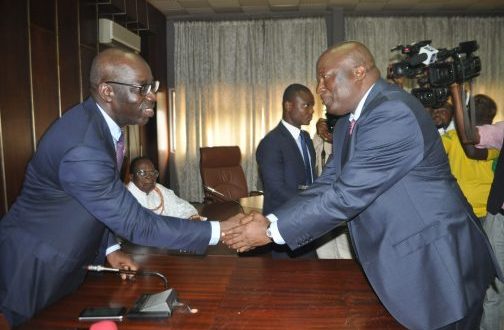 Obaseki names Ogie, Mayaki as Secretary to Govt and CPS

Gov. Godwin Obaseki of Edo on Monday in Benin, announced the appointment of Mr Osarodion Ogie as Secretary to the State Government.

Also appointed, according to him, are Mr Taiwo Akerele as Chief of Staff ,  Mr John Mayaki as his interim Chief Press Secretary and Mr. John Osakue, as Executive Director, Protocol.

The governor, who made the announcement while addressing the Head of Service of the state and permanent secretaries as he assumed office, said that men would be sworn in immediately.

He charged civil servants in the state to brace up for maximum productivity, saying that it was satisfying to note that the civil service was one that understood its responsibility as the bedrock of development.

He, however, decried the rot that had permeated the civil service at both state and federal levels.

Obaseki assured that his administration would build a strong civil service that would be vibrant, trusted, competent and reliable in spite of the glaring challenges.

“I have no doubt about the capacity of the civil service, but we will also need to clear the clog on the wheel of progress,” he said.

The governor said that there was need for civil servants to put in place a system that would support them through old age, maintaining that no government or system could succeed with a weak civil service.

He directed the permanent secretaries to take charge of the ministries until government’s programmes were properly defined.

He emphasised that until that was done, no political appointments would be made, adding that he study the transition committee’s report in groups with the permanent secretaries.

Charles Igbinidu is a Public Relations practitioner in Lagos, Nigeria
@https://twitter.com/ionigeria
Previous Fani-Kayode released after 24 days in detention
Next Pay attention to us like Chibok girls, wounded soldier urges Nigerians