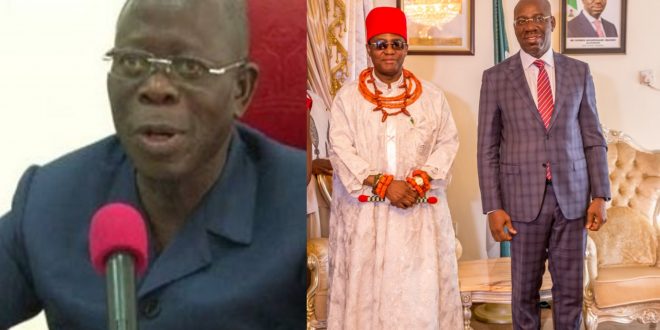 Former Chairman of the All Progressives Congress (APC), Adams Oshiomhole has accused Governor Godwin Obaseki of disrespecting the Oba of Benin.
Oshiomhole made the allegation while fielding questions on a talk-show on Arise TV. He accused the Edo state Governor of not only disrespecting the esteemed Benin palace, but also Edo tradition by the wearing a cap as he visited the monarch last week.

“You call yourself a Bini man, yet you came to Bini palace wearing a cap in company of other PDP governors.”

Last week, Governor Obaseki led a group of visiting PDP governors to the palace on a courtesy visit to the Benin monarch before proceeding to the Sam Ogbemudia Stadium to launch his campaign for a second term.