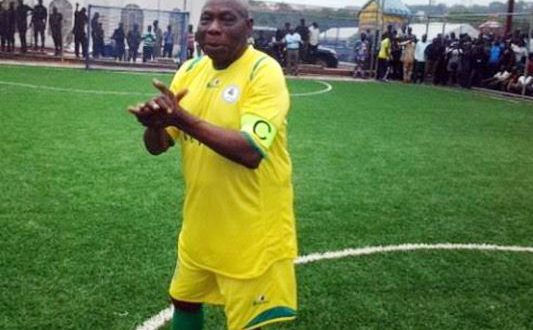 Former President Olusegun Obasanjo says his addiction to the game of Squash is one of the secrets behind his longevity.

He spoke on Saturday during the finals of the 3rd Olusegun Obasanjo National Squash Championship in Abeokuta, Ogun State.

The championship attracted participants from different states of Nigeria.

It was organized by Ogun State Squash Association in collaboration with Nigeria Squash Federation.

Obasanjo in his remarks, described squash, believed to be a game of the army, as interesting and exciting.

The 84-year-old player said the grace of God and the game of squash are secrets of his longevity.

“Those of you who probably feel that the game of squash is something that is fearful, you can now see the beauty, excitement, and the interest. It is a very beautiful game.”

Obasanjo hugged by one of the tournament participants

“Again, it is a game that does not require too much time. If you are a very busy person, when you play a game of squash for one hour, you must be sweating. There are other games, when you play them for three hours, you don’t even know that you are playing a game. But here, you are in the court for 45, 50 or 60 minutes, you have got a good exercise for the day.”

Obasanjo expressed his gladness over young talents in the participation and charged them to strive more for excellence.

He also applauded the participants, sponsor and the officials for making the tournament “interesting and successful.”

Meanwhile, Mistura Durosinoluwa from Kwara State, has emerged the winner of under 16 category of the tourney.

Mistura defeated Delight Allison from Akwa Ibom State by three straight sets in the final of the Championship played at the Olusegun Obasanjo Squash court in Abeokuta.

Durosinoluwa, who won under 16 girls category and Dominion Ntupe from Lagos, the winner in the boys category attributed the victory to hard work.

Number two seeded player in the championship from Delta state, Busayo Olatunji, defeated number one player, Rofiat Abdulazeez from Kwara state 11-8, 8-11, 11-3 and 11-7 to emerge winner in the senior women category.