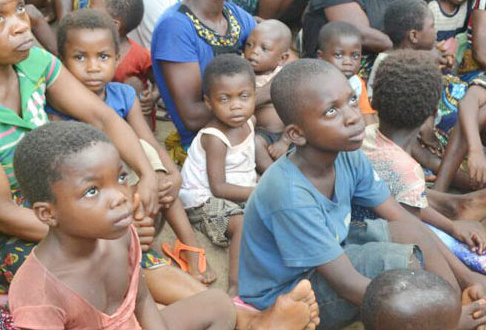 Spread the love
The spotlight has been turned on an ancient Nigerian culture where girls are sold in return for money and foods by their families.

According to a report by Channels Television on Friday, the Becheve tribe of Obanliku Cross River State subject their daughters to modern day slavery in a practice called “money marriage”.

The Becheve tribe in Obanliku is made up of 17 tribes, who practice an ancient tradition where young girls are exchanged for items such as foodstuffs or they are used in settling debts in what is known as“Money Marriage.” After the exchange, the girls are called “Money Wife” or “Money Woman”.

Richards Akonam, a missionary who has spent over 25 years building a strong advocacy against the Money Marriage culture, told Channels Television that relatives of the ‘Money Woman’ freely visit the couple after the ‘marriage’ and enjoy gifts including money.

“Apart from the ‘main man’ who gives out the girl into ‘Money Marriage’ the relatives of the girl’s mother are free to go and collect stuff from their ‘in-law’. Anything offered them during their visit is given monetary value and recorded by their in-law (the man who is marrying the girl).

“If the mother is the greedy type, she’ll often visit her ‘in-law’ to get stuff,” he said.

This practice is sadly carried out without the consent of the girls. They are sold out to clear debts owed by a relation or debts owed even before her birth. The ‘Money Wife’ most sadly does not benefit from the ‘Money Marriage.’

“While her parents or relatives share money and other gifts by the ‘groom’, she is left alone to struggle and find a means of survival.

“The girl (money girl) can only benefit if anyone who has gone to collect anything shares with her. This hardly happens. She will be responsible for taking care of herself by farming or otherwise. None of her relatives will buy or give her gifts. She now belongs to another and helping her translates to helping her owner,” Akonam said.