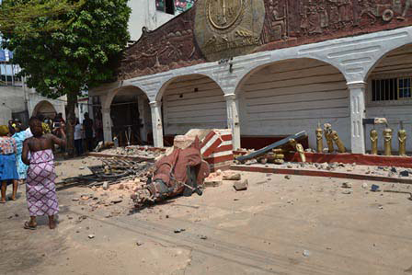 BENIN—OMO N’Oba N’Edo Uku Akpolokpolo, Oba Ewuare II (Ogidigan), on Wednesday, went after the suspended Isekhure of Benin, Chief Nosakhare Isekhure, as his chiefs stormed the palace of Chief Isekhure, to secure the Erimwi-Idu Shrine belonging to the Oba and in the process brought down part of the palace after which the entire building was sealed off.

Chief Eduwu Ekhator, the Obasogie of Benin Kingdom, who led other chiefs to the ancestral palace of Chief Isekhure, explained that the action was “part of the process of ostracizing him,” noting that the safety of some vital and important

artifacts in the palace, “now in the wrong hands,” was worrisome to the Oba.

It will be recalled that the Benin Traditional Council, BTC, led by the Iyase of Benin, Chief Sam Igbe, had suspended Chief Isekhure indefinitely, accusing him of violating several palace rules as a chief of the Oba. Among the allegations was that Isekhure allegedly “openly badmouthed senior chiefs and vilified them, and during those times he declared that the chiefs were not senior to him and that he would not pay respect to them again as palace customs demand.”

But in a swift response, the Ihogbe N’Ore, in a statement by Mr Osagbakhoe Ogbomuda, described the allegations as untrue, claiming the palace was engaging in a cheap blackmail which according to it, was a “case of giving a dog a bad name so that one can have a reason to hang such dog”.

However, the invasion of Chief Isekhure’s palace caused traffic jam on Sakpoba Road, Benin City, for several hours, as Ihogbe youths, the family Chief Isekhure also hails from, destroyed the statues of the Isekhure and every structure erected in the compound which made the place a palace.

the destruction. Before the destruction commenced, Chief Ekhator pleaded with Chief Isekhure who was inside the compound to hand over all property of the palace peacefully.

For several hours Chief Isekhure locked himself inside the house. However, when he came out, he had a heated argument with Chief Ekhator and other palace chiefs, asking if they came to arrest him. While he was arguing with them, Chief Ekhator signalled the police men to come over, Chief Isekhure ran inside his room immediately and locked up the door.

That infuriated the palace chiefs who then ordered for the demolition of part of the palace. Explaining their mission, Chief Ekhator told journalists that “This is the process of ostracizing him (Chief Isekhure).

Some of the real power house of the monarchical power of the Oba, are here. Information reaching the palace is that some artifacts are being tampered with. Obviously the Oba is the owner of that building, even though in his magnanimous manner, he kept him there to take care of those things.

He is like the sceptre bearer of the Oba, he now wants to take the sceptre and run away instead of keeping it for the Oba. The Oba will look for it. We have had cause to secure artifacts and the shrine and possibly the area they occupy it so that it cannot be broken.

“This house is the Oba’s house. We are not after the man. The Oba has already told him to take those other extensions he built there. But the original foundation of the palace property should remain where it is. It is a monumental structure which we must fortify.”