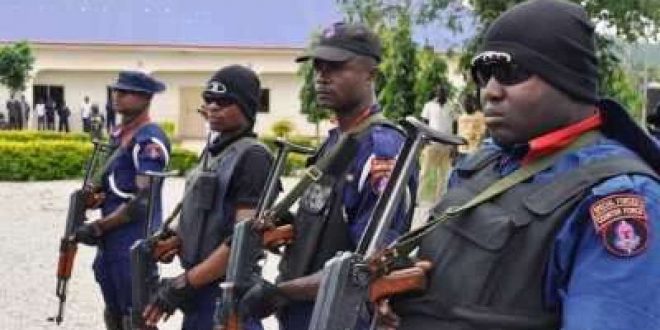 NSCDC Nabs Man For Having Sex With Teenager In Court Premises

A 43-year-old man, Yusuf Adamu, from Zango, Birninkudu, the headquarters of Birninkudu Local Government of Jigawa state, has been arrested for allegedly sleeping with a 13-year-old boy.

The suspect, an official of Birninkudu Magistrates’ Court, was alleged to have committed the offence on the court premises at night.

The Nigeria Security and Civil Defence Corps (NSCDC) Commandant of Dutse command, Muhammed Durmin Iya, parading the suspect on Monday warned parents and guardians to take care of their children and wards, to prevent them from being abused by criminals.

He said the suspect was arrested on the premises of Birninkudu Magistrates’ Court trying to lure the boy with the intention of having carnal knowledge of him for the fourth time.

Adamu is said to be married, having nine children (five boys and four girls).

Upon interrogation, the suspect confessed that he introduced the victim to sodomy, adding that he had carnal knowledge of him more than four times.

“I have slept with him on the court premises at night more than four times,” he confessed.

The victim on the other hand said: “He gives me N100 each time he sleeps with me. He had sex with me three times. On the fourth occasion when we were caught, he gave me N200.”