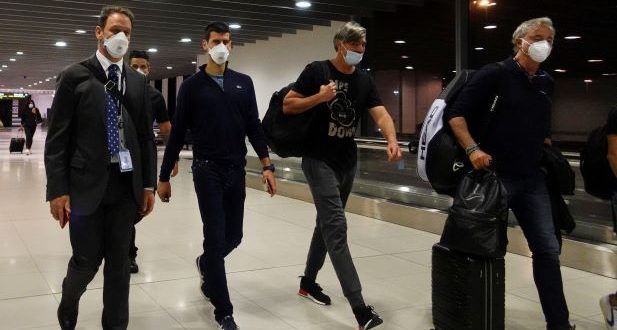 Novak Djokovic, 34, leaves Melbourne airport as he is deported from AustraliaCredit: Reuters

Novak Djokovic faces a three-year ban from the Australian Open after being kicked out of the country.

Tennis’ world No 1 had his visa cancelled by the Australian Government and then lost his court appeal in Melbourne yesterday.

Having fallen foul of the country’s strict Migration Act, Djokovic will not be granted a visa for three years ‘except in certain circumstances’.

The Serb yesterday flew out from Australia ‘to rest and to recuperate’ with his family.

Unvaccinated Djokovic, 34, said: “I’m extremely disappointed with the court ruling to dismiss my application for judicial review of the minister’s decision to cancel my visa.

“I respect the court’s ruling and I will cooperate with the relevant authorities in relation to my departure from the country.

“I’m uncomfortable that the focus of the past weeks has been on me. I hope that we can all now focus on the game and tournament I love.”

The nine-time Aussie Open champ has been ordered to pay costs and might never play in the tournament again.

The visa cancellation was unanimously upheld by a federal court’s three-judge panel 12 days after he arrived in the country.

Aussie Open officials will beef up security to avoid any potential anti-vax protests at Melbourne Park.