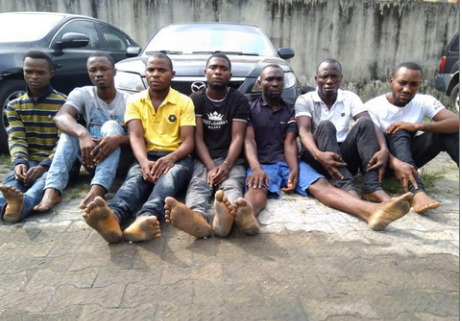 The police has arrested seven notorious kidnappers allegedly responsible for the abduction of an Assistant Comptroller of Customs in Onne, Rivers state.

On 13/11/2018, Assistant Comptroller of Custom Justina Tanko was kidnapped by a gang of notorious kidnappers and taken to an unknown destination from a Restaurant she frequents.

Upon receipt of the information on her kidnap, operatives of IGP-intelligence Response Team IRT deployed to Port-Harcourt by IGP Ibrahim K. Idris led by DCP. Abba Kyari immediately commenced investigation into the kidnap and with the aid of technical intelligence, active members of the gangs were identified.

Immediately after a negotiated ransom of five million (5,000,000) naira was paid by her family on 15/11/18 to avoid risking her life during Rescue Operation and her subsequent release on the same day. Operatives immediately commence action and within 24hrs after her release the first suspect was arrested and subsequently in an operation that lasted for about 72hrs seven (7) confirmed members of the gang were arrested.

The gang is notorious in kidnap for ransom and thereafter causing the disappearance of their hostages after collection of ransom in some of their Kidnappings, they also made some confession of their robbery escapade where they operate in two local governments areas of, Eleme LGA and Gonna LGA in Rivers State with a strong hold in Biara town in Gokana LGA and Trailer park in Eleme LGA.

The names of the kidnappers and roles played by each member already arrested are;

1. Zigabari Voonu ‘m’ 32yrs from Ogu-Gbolo LGA Rivers State. Works as a security guard in the restaurant the Customs Officer frequent, he brought the kidnapping job to one ‘Bobo” & his gang. He also alerted the gang when the officer arrived the Restaurant on the day of the kidnap. He is a member of the deadly degbam secret cult.

2. Maxwell Barindom ‘m’ 32yrs from Gokana LGA, Rivers. He is a member of Degbam secret cult and a close ally of the leader of the gang. He partook in planning the kidnap and his phone was use for ransom negotiation.

3. Dele Kunewo-Liaga ‘m’ 35yrs from Gokana LGA Rivers State. Has brought numerous kidnap jobs for “Bobo” & his gang. He is also a member of the deadly Degbam secret cult.

4. Tordi Barinaa ‘m’ 27yrs from Gokana LGA. An active member of the gang and has gone on numerous kidnap operations. He is also a member of the deadly Degbam secret cult.

5. Godspower Keenom alias “Immortal” m 23yrs from Gokana LGA Rivers State. An active member of the gang Involved in numerous heinous crimes including the kidnap of one Chibuike Ezewuno, whom suspect confirmed was killed and his corpse thrown into a river after collecting a ransom of 3 million naira with his share being 300k. He is a member of Degbam secret cult.

6. Justice Afangide alias Max P ‘m’ 33yrs from Etimekpo LGA Akwa Ibom state. An ex-convict of PH max prison, engages in a lot of heinous crimes including armed robbery & kidnapping. His share from the customs officer’s kidnap was 350k which he invested in illegal oil bunkering.

7. Oludofin Yakubu ‘m’ 26 from Ondo state. An ex-convict of PH max prison. He is the operational driver of the gang he drove the car that was use to kidnap the officer.

Exhibits recovered include, 2 Ak47 Riffles and Pump Action Gun, the gangs’ operational vehicle and the VW Golf belonging to Chibuike Ezenkwu whom the gang kidnapped in the month of May 2018 and till date he has not been released as the gang confessed that he was killed and thrown into the River after collection of ransom because he knows them.

Suspects are cooperating with Operatives and have made more useful confessions that will aid the investigation. While frantic effort is still ongoing to arrest “Bobo Biara” the gang leader who is still in possession of the large chunk of ransom meant for members of the gang already arrested and also the arrest of other fleeing gang members and recovery of more weapons.

Previous Yahoo Plus: Lady Allegedly Runs Mad After Being Dropped From Lexus SUV (Video)
Next Nigerian Man Found Dead In An Abandoned Building In Italy