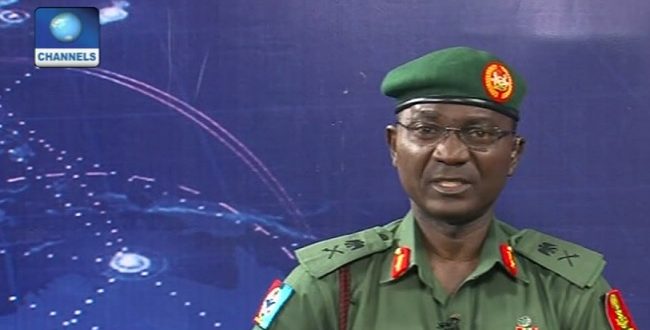 The Director of Defence Information, Maj. Gen. John Enenche, was a guest on Channels TV yesterday where he stated that the military was not planning to arrest anyone on social media that makes anti-military or anti-government comments because they do not have the power to make such arrests.

Recall that Enenche was a guest on the same channel on August 23rd where he disclosed that the military is monitoring social media for comments that are anti-military, anti-government and anti-security. Many Nigerians thought it meant that the military would soon begin to arrest anyone that makes such comments online.

The anxiety in Nigerians grew when Vice President Yemi Osinbajo during his time as acting president, had announced that hate speech would now be treated as an act of terrorism.

During his interview yesterday, Enenche said the military was just going to monitor the social media space but it has no power to arrest anyone that makes hate speech on social media.

“There was nothing like that. We do not have power to arrest people for hate speeches. It is just false assertion, against the military, and against my humble self that I said that we will be arresting people or checkmating people. The military is not going to be monitoring hate speeches. Did I tell you hate speech in your recordings? We have a strategic media centre, our strategic media centre monitors the media, simple. And it is like that all over the world. And we take that because it helps us to transform the nature of the intelligence to enable us to prepare for whatever call up we get to ensure security in this country. Let me tell you and tell the public without fear of anybody; we are trained to do threat analysis of anything that would threaten the security of this country. So, it is part of our threat analysis. Any person can interpret it to mean that it is a follow up to the speech of the Vice-President (Yemi Osinbajo), the then Acting President and then the minister of interior; then that person can be right. Where do we take instruction from, where do we get information from? But on the whole, it is part of what is called threat analysis.” he said

Previous Man Diagnosed With Throat Cancer Kills Colleague Who Introduced Him To Smoking
Next  Man sues his wife for being ugly, and the court AGREES… awarding him £75,000