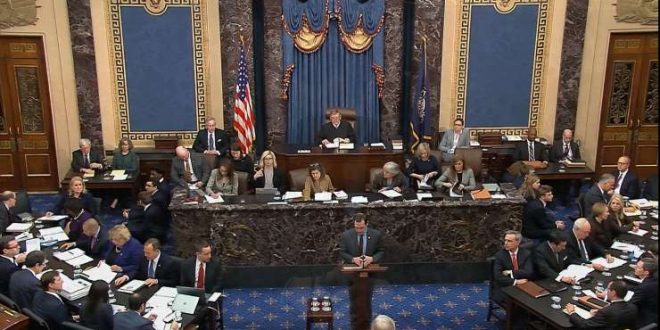 In this image from video, House impeachment manager Rep. Jason Crow, D-Colo., speaks during closing arguments in the impeachment trial against President Donald Trump in the Senate at the U.S. Capitol in Washington, on Feb. 3.

WASHINGTON (AP) — President Donald Trump won impeachment acquittal Wednesday in the U.S. Senate, bringing to a close only the third presidential trial in American history with votes that split the country, tested civic norms and fed the tumultuous 2020 race for the White House.

A majority of senators expressed unease with Trump’s pressure campaign on Ukraine that resulted in the two articles of impeachment. But the final tallies — 52-48 favoring acquittal of abuse of power, 53-47 of obstruction of Congress’ investigation — fell far short. Two-thirds “guilty” votes would have been needed to reach the Constitution’s bar of high crimes and misdemeanors to convict and remove Trump from office.

What started as Trump’s request for Ukraine to “do us a favor” spun into a far-reaching, 28,000-page report compiled by House investigators accusing an American president of engaging in shadow diplomacy that threatened U.S. foreign relations for personal, political gain as he pressured the ally to investigate Democratic rival Joe Biden ahead of the next election.

No president has ever been removed by the Senate.