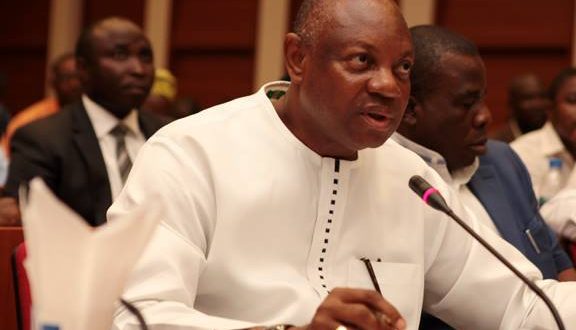 No Money Was Found in My House – Says Mrs. Ibinye Boroh

The embittered former Special Assistant to the President on Niger Delta and Coordinator of Amnesty Programme, Brig. Gen. Paul Boroh has dismissed the reports in the media claiming that the operatives of the Economic and Financial Crime Commission (EFCC) and Office of the National Security Adviser (ONSA) discovered $9 million cash at his residence.
The Wife of the former Amnesty boss, Mrs. Ibinye Boroh who addressed the press on Wednesday told the press that no cash was found in their house and described the allegation as fabrication of lies, false, malicious and calculated attempt to mislead the public.

‘‘My attention has been drawn to the publication in some of the Nigerian media particularly the front page of Thisday Newspaper to the effect that $9million was recovered by the operatives of the EFCC from our house and premises in the course of their search.

‘‘This is to inform the general public that no cash was discovered and could not have been discovered by government operatives during their search in our house last Monday.

‘‘The publication by a section of the press stating the contrary is fabricated, false in its entirety, malicious and calculated to mislead the public.

Also addressing the media on the matter, the legal adviser to Gen. Boroh, Chief Olusola Oke also faulted the media reports, insisting that no money was found in the home of his client and demanded immediate retraction of the reports by all the media that reported same.

‘I am speaking to you on the instruction of my client, Gen. Boroh, the immediate past Coordinator of Amnesty Programme of federal government. My client’s family attention has been drawn to the front page publication of today’s publication of one of the national dailies, which was also reechoed by other sections of the media, reporting that $9 million was recovered from the house and premises of my client in the course of the search conducted by the EFCC operatives sometime on Monday .

‘‘The family has been very worried, I have received calls from his friends, who know that I am his counsel in this matter and based on the calls I received, I have made contacts with my client and I have also made contacts with his family, all confirmed to me that this publication was total false.

‘‘This publication has disparaged my client in no small measure because no such money was recovered by the operatives during their long lasting and extensive search on his house and premises. Nothing incriminating, not to talk of dollars was found, which the media organization has found itself a veritable weapon to convey this defamatory statement to the public?

‘‘But because we do not want to insinuate malice at this stage, we needed to speak to the press. This information is not correct, it is totally fallacious and defaming to our client. And we have our client’s instruction to invite the media , including those that also reechoed the report to retract it because it is not true. And if they have their evidence and know that is true, then they should come forward and justify it.’’

‘‘We have also contacted the EFCC and they have also confirmed that at no time did they release such information to any media house, that they never claimed such publication.’’

‘‘But I can confirm to you that our client was arrested and he is still in the custody of the EFCC and we are not bothered because, once, there is an allegation, there is bound to be investigation and the ECFCC is carrying out investigation. We have no problem with that but the information that has the capacity to defame our client is the one we are calling on those who have published it to retract it within 48 hour ,’’ he explained