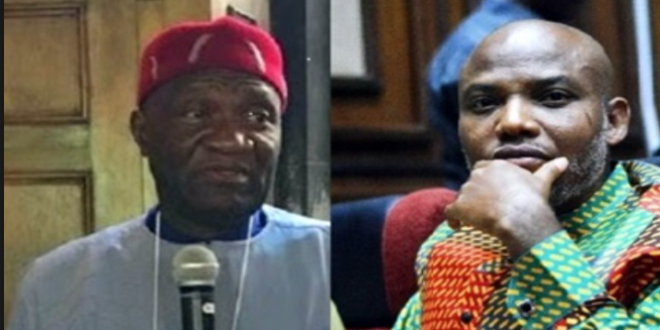 A proscribed group, The Indigenous People of Biafra, IPOB has indefinitely banned the Ohanaeze Ndigbo from the South-East.

The ban was ordered by the leader of the separatist group, Nnamdi Kanu.

Mr Kanu placed the ban on Ohanaeze during his Sunday broadcast suspected to be coming from Isreal. He stated;

“We are taking our stolen freedom back and nobody will stop us,” Kanu, whose group has been calling for a referendum to decide their stay with Nigeria, said.

“Ohanaeze Ndigbo is banned for life. The organisation can hold its irrelevant gatherings in Lagos, Abuja, Sokoto and Kaduna, but not on our land. If Nwodo holds Ohanaeze meeting in Igboland, we will scatter them. Their meeting in MUSON Centre Lagos is irrelevant.

“These are men that met and conspired to kill me. Igbo traditional rulers met at Nike Resort and allegedly accepted money shared through Nnia Nwodo, to support my assassination. I will mention the names of all those who supported Operation Python Dance. I’m waiting for them to grant their usual One Nigeria interview, then, I will decimate them live on air.

“Voting in Nigeria has never brought anything good to the people. From the British who rigged the census of 1953 and 1957 and installed their Fulani puppets, it has been selection, instead of election.

“We have seen people without any known certificate take turns in raping us both politically and economically. This movement of IPOB is saying enough is enough.

“Unfortunately, it was a succession of Igbo men that put us in the mess we are in today, in Nigeria. The same mistake Dr. Azikiwe, Gen. Aguiyi Ironsi and Nzeogwu made, Nnia Nwodo, Dave Umahi and their kinds are repeating today. Nigeria was never meant to be one.

“We all heard the news about Customs Officers who set up 15 roadblocks from Apapa Wharf to Aba main town, all in a bid not just to criminally extort money from our people, but to punish us as a conquered people.

“They are not contented with making us import goods from Lagos which benefits the Yoruba economy and the government of Lagos State.

“Igweocha seaport is only 60 kilometres away, but we are not allowed to use it. We are forced to endure police, army, road safety, NDLEA, Civil Defence and customs checkpoints all the way from Lagos, where the goods are properly cleared and certified to our markets in the East and South.

“No Igbo politician, not a single one, has the mettle to challenge this apartheid system. This is evil. There is no roadblock in the whole of the North, where Boko Haram, Fulani terror herdsmen, armed robbers, kidnappers and various armed groups have made life unbearable for law abiding citizens.

“But, in the peaceful land of Biafra, from Igbake in Edo State to Azumiri and Opobo every kilometre is a roadblock.

“This was the menace Nwodo promised to take up when he was appointed Ohanaeze leader, but, till date, nothing has happened because they sold themselves so cheaply to the caliphate for peanuts. No dignity, no respect, no honour.

“The evil extortion of Biafran businessmen is going on right now in Aba, Abia State. Some of our brothers who imported their goods down to Biafra land were stopped by Nigerian Customs officers after they had cleared their goods in Lagos.

“If our people can learn to stand up against these evil and corrupt government agencies that are hell-bent on extoring and killing our people in their land, things would get a lot better as we march towards the restoration of Biafra,” he added.