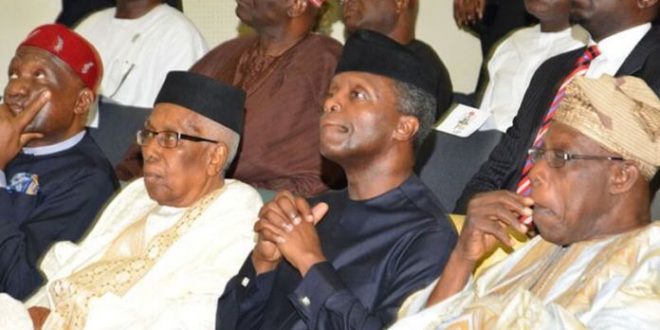 The vexed issue of the unity of Nigeria was again on the front burner of national discourse Thursday as Acting President Yemi Osinbajo, former President Olusegun Obasanjo and President of Ohanaeze Ndigbo, Chief John Nwodo Jnr., were unanimous in agreeing that there was nothing wrong discussing the corporate existence of the country, appealing, however, for moderation in such discussions.

They spoke Thursday in Abuja at an event marking 50 years of Biafra.

The event coincided with a national dialogue in Abuja, organised in honour of a former Minister of Information, Chief Edwin Clark, where leaders of the regional socio-political blocs disagreed over the desirability of implementing the report of the National Conference held in 2014.

At the commemoration of 50 years of Biafra, Osinbajo drew applause when he said there was nothing wrong in discussing the existence of Nigeria, stressing that Nigerians should use the country’s diversity to make her great instead of trying to flee into the lazy comfort of homogeneity.

He spoke further: “I was 10 years old when my friend in school, Emeka left school one afternoon. He said his parents had decided to go back to the East. I never saw Emeka again. My aunty, Bunmi was married to a gentleman that I cannot recall his name again, but I recall when my parents tried to persuade her and her husband not to leave. We never saw again. We are better together than apart. No country is perfect.”

In his remarks, Obasanjo said Nigerian leaders of today should see it as a challenge to progress from where the founding fathers of the nation stopped by not only seeking for only freedom but unity and stability of the country.

Obasanjo who first ruled the country as a military Head of State between 1976-1979, said though the young military officers who struck in 1966 coup were naive, there were some elements of nationalism in some of them.

The former president counselled that none of the entities that make up Nigeria should leave the union or be pressured to do so.

“It’s like a husband and wife. If when you have issues, your wife would always say she is fed up and wants to go. And every day that is what you get; one day, you would become fed up and say, ‘ok you can go.’ But if there is any misunderstanding and you come together to solve it, then you would almost live forever.

However, Nwodo Jnr., who lamented the sufferings and deprivations which the Igbos had been subjected to since the Biafran war ended, accused the beneficiaries of the faulty old order of opposing the call for restructuring of the affairs of the country.

He said the new federation that could address the concerns was that which was collectively owned by all and not one perceived as a private property of one group or ethnic group.

While lamenting the post-war experience of Ndigbo, Nwodo said: “Every bank deposit of Biafrans that had encountered a transaction whether by deposit or withdrawal was reduced to £20. Massive savings were completely wiped out. Capacity for investment and recovery from the war were shattered.”

As a way out of the present circle of agitations, the Ohanaeze chieftain said: “We want a Federal Republic of Nigeria, which is collectively owned by all Nigerians as opposed to a federal republic that would be perceived as the private property of one group or groups of ethnic groups depending on who was in office.

“We must create a national order whereby each state bears the primary responsibility for its development.

“We must find creative ways to manage a complex multi-ethnic and multi-religious state. History teaches us that no society is static; the status quo cannot endure forever.

“We must find creative ways to promote political, economic and social justice within a nation and between the people that comprise it. If not, then we are invariably opening the doors to future threats of chaos, disorder and societal dislocation.”

Attah, who was the keynote speaker at the discourse with the theme: ‘Restructuring, True Federalism and Resource Control: Panacea for Enduring Peace and Sustainable Development in Nigeria’, stressed that the debate on restructuring and resource control would persist because it was a cornerstone of true federalism.

He explained that resource control was not the same with derivation, clarifying that before the advent of the 1999 Constitution, the principle of derivation was subjected to severe and whimsical gerrymandering by various presidents and heads of state that ruled Nigeria.

He, however, explained that restructuring did not mean going back to the old regions or making the six geopolitical zones federating units.

As a way forward, Attah advocated a national discourse to determine what should happen to the existing states, warning: “Otherwise, we could be creating more problems than we had set out to solve.”

Coming with a different perspective, Abdullahi said he believed more in resource management as opposed to the calls for resource control being championed by Attah and other stakeholders, especially from the southern part of the country.

He explained that his decision to change resource control to resource management was because the nation’s founding fathers judiciously managed the meagre resources available to them for the development of the country up to the time of independence.

He said: “You will agree with me that during the time of our founding fathers, Nnamdi Azikiwe, Obafemi Awolowo, the Sarduna of Sokoto, Ahmadu Bello, they never had the volume of resources that are available for Nigeria today.

“But I can tell you that those our founding fathers managed the resources, these very scarce resources to achieve so much for this country up till independence.

“In fact for me, the concept of their resource management was what promoted equity, fairness and justice to various parts of this country, and that is what brought about the kind of really political unity and stability during the independence.”

On the 2014 National Conference, Abdullahi said he shunned it because the delegates were chosen through undemocratic means.

But disagreeing sharply with his position, Odumakin said: “The 2014 conference is one of the best, if not the best ever in this country.”

Odumakin wondered why the north was always harping on landmass as a means to acquire more resource allocations when in fact it should be an asset to be economically viable through agriculture and other comparative advantages.

He compared Niger State with Netherlands that had almost the same size in land mass but the European country today was only behind the United States in the area of agricultural produce with strong agro-based economy unlike the Nigerian state that relied wholly on resource allocations from the centre.

He said the country was only talking about resource control because there was no fiscal federalism in place.

According to him, “The campaign for restructuring is to maximise our resources in Nigeria.”

Odumakin remarked that those who opposed restructuring wanted to continue to reap where they did not sow. “Educate your population, employ and task them to make more money. Cultivate the more landmass you have to get more money rather than running to Abuja,” he said.