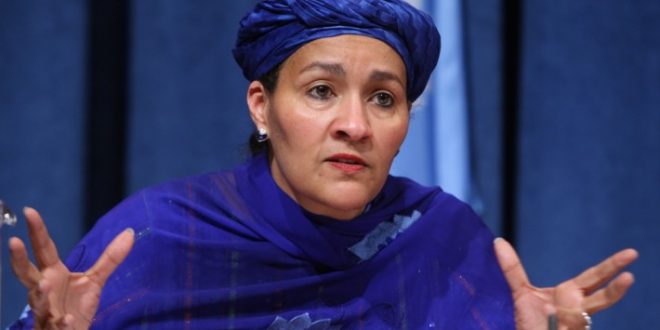 Nigeria’s Minister of Environment, Amina Mohammed will soon be confirmed as a Deputy Secretary General of the United Nations.

If confirmed, she would deputise for newly Elected Antonio Guterres who is set to take office as the UN scribe on January 1, 2016.

According to a tweet by Pamela Falk, CBS news reporter for the United Nations, the world body would soon release a statement confirming the appointment of the Buhari’s Minister.

Until her appointment as a Minister of the Federal Republic of Nigeria in November 2015, she was the Assistant Secretary/Special Advisor to the United Nations Secretary General on Post-2015 Development Planning.

Amina Mohammed was also recently appointed by President Muhammadu Buhari to serve in the African Union(AU) Reform Steering Committee as the Nigerian representative.

The committee, headed by President Paul Kagame of Rwanda is tasked with ongoing institutional reforms of the AU Commission and its organs.

The committee which comprises eminent persons from the continent will work on part-time basis to produce a report for presentation to the 28th African Union Summit in January 2017.

A versatile and accomplished development practitioner in the public, private and civil society sectors with over three decades experience, Mrs Mohammed had served as the Senior Special Assistant to the President of Nigeria on MDGs, serving three Presidents over a period of six years.

Also, the new Secretary General is expected to take his oath of office on i January, 2017.