Home / Life and Style / Travel and Tourism / Nigerians trapped as volcano erupts on the Caribbean Island of St. Vincent and the Grenadines 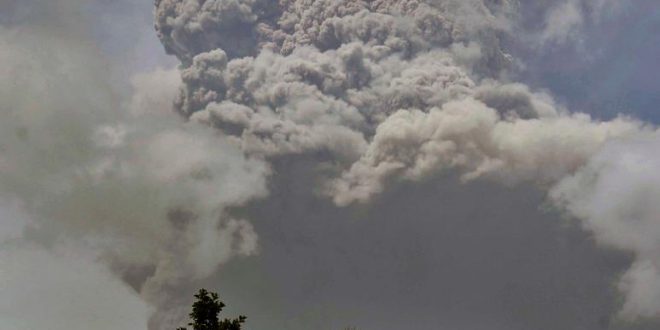 Nigerians trapped as volcano erupts on the Caribbean Island of St. Vincent and the Grenadines

La Soufrière, on the main island of St. Vincent and the Grenadines, last erupted in 1979. It sent two explosive plumes of ash and smoke on Friday, and 20,000 people fled.

Emergency management officials said the ash column rose about six kilometres (3.7 miles) high and that the ash was headed east into the Atlantic Ocean.

As a result, many Nigerians are currently trapped on the Island.

Dr. Levi Odoe, the Consul-General of Nigeria on the Island, has therefore appealed for support from the Nigerian government and other public-spirited entities around the world.

“There are a lot of Nigerians on the Island, and this causes health challenges. Families are being moved to other countries. We will appreciate assistance from well-wishers and friends,” Dr. Odoe appealed in a message.

It was gathered that there are no fewer than 230 Nigerian students studying medicine on the Island and a host of tourists from the country were there when the tragedy occurred.

So far, thousands of people have been evacuated to safer parts of the Island and neighbouring Island nations, using buses and cruise ships.

Desperate citizens shared videos of the eruptions, which began on April 9 when black ash and smoke plumes overcast the air at about a 6-kilometer range.

Dormant since 1979, the volcano started showing signs of activity in December, spewing steam and smoke and rumbling away. That picked up this week, prompting Prime Minister of St Vincent and the Grenadines Ralph Gonsalves to order an evacuation of the surrounding area late on Thursday.

Heavy ashfall also was reported in communities around the volcano, said Erouscilla Joseph, director of the University of the West Indies Seismic Center.

“More explosions could occur,” she said in a phone interview with The Associated Press, adding that it was impossible to predict whether they might be bigger or smaller than the first one.

There were no immediate reports of casualties from the eruption that occurred four days short of the 42nd anniversary of the last sizeable eruption.

In the coastal town of Barrouallie, about 14km (nine miles) from the volcano, evacuees trudged towards shelters carrying backpacks, duffel bags, and shopping bags stuffed with personal belongings after the explosion. Some are prepared to stay there, while others were expected to board cruise ships or go to nearby islands that have offered help.

The new eruption followed mandatory evacuation orders issued on Thursday for the roughly 16,000 people who live in the red zone near the volcano in the island’s northern region. Roughly 2,000 people were staying in the 20 shelters the government had opened, Gonsalves said in a press conference.

“We have had hiccups here and there … but by and large we are proceeding pretty well,” Gonsalves said. He later wiped tears from his eyes and apologised for crying while he thanked people and other governments in the region for opening their homes and countries to St Vincentians.

He said some 4,500 residents near the volcano had evacuated already via ships and by road. St Vincent and the Grenadines, located about 160km (99 miles) west of Barbados, have a total population of just over 100,000 people.

Gonsalves said that depending on the damage done by the explosion, it could take up to four months for things to return to normal.