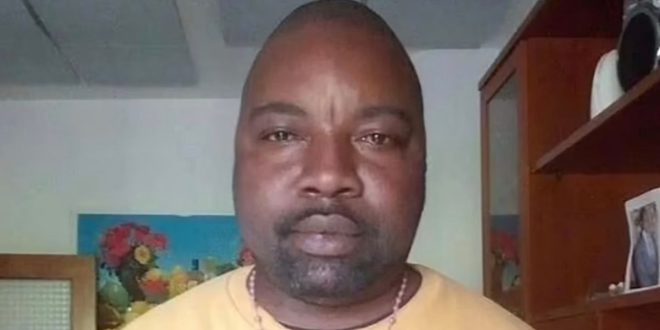 Alika Ogorchukwu, a married dad-of-two, was beaten to death in the middle of Civitanova Marche town centre, in eastern Italy, with the vile attack captured on video

Outrage has been sparked in Italy over the death of a Nigerian migrant who was beaten to death in full view of the public with no one helping.

The Nigerian street trader was assaulted by another man in Civitanova Marche town centre, in eastern Italy, with the attack captured on video on Friday.

The disturbing recording, which ionigeria.com has chosen not to show, appears to have been made by onlookers who aren’t intervening.

A white man is seen in the video holding the victim to the ground despite his struggles.

A 32-year-old Italian has been arrested on suspicion of murder and robbery.

The circumstances of the attack are unclear but the video sparked anger online when it was posted on Italian news websites and social media.

Many highlighted the “indifference” of witnesses who did not intervene as the fight continues.

Alika Ogorchukwu, a married dad-of-two, has been named as the victim.

His wife, Charity Oriachi, was in tears as she spoke to local news about the incident and how she was shown the body of her husband lying on the ground.

Attending a protest with hundreds of people from the local Nigerian community, she said: “Now I just want justice for my husband.”

Police investigator Matteo Luconi told a press conference: “The aggressor went after the victim, first hitting him with a crutch.

“He made him fall to the ground, then he finished, causing the death, striking repeatedly with his bare hands.”

Civitanova Marche’s mayor, Fabrizio Ciarapica, met with members of the Nigerian community after the protests.

“My condemnation is not only for the (crime) but it is also for the indifference,” Ciarapica told Sky.

“This is something that has shocked citizens.”

The attack has also been condemned by Italian politicians.

Enrico Letta, the leader of the left-wing Democratic Party, said what happened was “dismaying”.

“Unheard of ferocity. Widespread indifference. There can be no justification,” he said.

Right-wing leader Matteo Salvini also expressed outrage over the death, saying “security has no colour” and “needs to return to being a right”.

Former Premier Matteo Renzi, who heads his own small party, claimed politics is leading to a feral environment in Italy.

He said on social media: “I am horrified by this electoral climate. A father was killed in an atrocious and racist way while passers-by took video without stopping the aggressor.

“And instead of reflecting on what we are becoming, politicians argue and instrumentality.”

Charles Igbinidu is a Public Relations practitioner in Lagos, Nigeria
@https://twitter.com/ionigeria
Previous Boko Haram Leader In Ogun State who poised as a Security Man Arrested by DSS
Next Freed train passenger who was shot during captivity narrates ordeal says bullet yet to be removed from his body