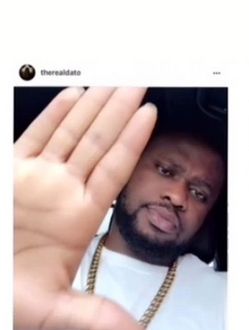 Nigerian Man Arrested For Raping A Girl In Edo State

According to a friend of the victim: “ So after so much begging and persuasion from this instagram slay king @therealdato, my friend eventually agreed to go chill with him in an open place in Benin.
On their way to the said venue, uncle stopped at zoro supermarket to get drinks and when asked why, he said he won’t be chanced later to do the shopping and just wanted to do it now since he’s passing same route and that was how my friend said ok.

After that, he drove to his house claiming he just wanted to pick up something from the house and drop the drinks as well. Initially she was reluctant about coming down from the car but uncle kept on talking forming he’s not a baby that they are both mature.

That if it’s about sex he would just ask her for it that he’s not like so she should stop acting like a baby and come inside rather than staying inside the car sweating because he will turn of the ignition.

She agreed and said she was pressed and asked for the rest room, but immediately she got to the restroom upstairs uncle ran upstairs and locked the door that was when the whole thing became suspicious.

Immediately she told him to open the door that she wanted to go home but he refused instead he started playing gospel songs and increased it to the highest.

My friend cried and begged this bastard she even told him she had apendix operation to do the next day rather he said her tears was turning him on the more he then tore her clothes and raped her.

He later dropped her along the road. It was after she reported and investigations were made that these soldiers took up the case. He confessed that he’s been doing it to other girls. Nemesis has finally caught up with this instagram slay king .”