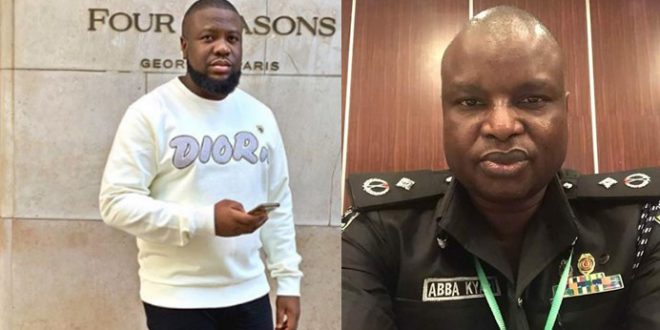 Nigerian Govt. files application for extradition of DCP Abba Kyari to the US

Nigeria has approved the request by the United States for the extradition of suspended Deputy Commissioner of Police (DCP) Abba Kyari.

A grand jury, last April 29, filed an indictment against Kyari with the approval of the U.S. District Court for the Central District of California.

He was accused of conspiring with a United Arab Emirates (UAE)-based Nigerian, Ramon Abbas, aka Hushpuppi to commit the crime.

On Wednesday, the Attorney-General of the Federation and Minister of Justice, Abubakar Malami (SAN), filed an application before the Chief Judge of the Federal High Court in Abuja for Kyari’s extradition.

The application marked: FHC/ABJ/CS/249/2022 was filed under the Extradition Act.

The AGF said the application followed a request by the Diplomatic Representative of the U.S. Embassy in Abuja.

It is “for the surrender of Abba Alhaji Kyari, who is a subject in a superseding three counts indictment”.

Kyari and five other police officers are undergoing interrogation by the National Drug Law Enforcement Agency (NDLEA) over a cocaine deal.

In the affidavit filed in support of the extradition application, the AGF stated that he was satisfied that provision is made by the laws of the U.S. such that so long as Kyari has not had a reasonable opportunity of returning to Nigeria, he will not be detained or tried for any offence committed before his surrender other than the extradition offence which can be proved by the fact on which his surrender is sought.

He added that he was satisfied that the offence in respect of which Kyari’s surrender is sought is not political nor is it trivial.

The AGF also expressed satisfaction that the request for the surrender of Kyari was not made to persecute or punish him on account of his race, religion, nationality or political opinions but in good faith and the interest of justice.

He added that Kyari, “if surrendered, will not be prejudiced at his trial and will not be punished, detained or restricted in his personal liberty, by reason of his race, nationality or political opinions”.

The AGF said having regard to all the circumstances in which the offence was committed, it will not be unjust or oppressive, or be too severe a punishment, to surrender him.

Malami said he was also satisfied that Kyari has been accused of the offence for which his surrender is sought.

He noted that there was no criminal proceeding pending against Kyari in Nigeria for the same offence.

According to court documents, the three count-charge marked: 2:21-cr-00203-RGK, was filed on April 29, 2021, before the US District Court for the Central District of California, USA.

The charge filed along with the extradition application reads:

In the request for Kyari’s extradition, the U.S. Embassy stated: “On April 29, 2021, based on the indictment filed by the grand jury and with the approval of the United States District Court for the Central District of California, a deputy clerk of the court issued a warrant of arrest for Kyari.

“The arrest warrant remains valid and executable to apprehend Kyari for the crimes with which he is charged in the indictment.

“Kyari is wanted to stand trial in the United States for conspiracy to commit wire fraud and money laundering, and identity theft.

The embattled “super-cop” has challenged the order made on February 22 by Justice Zainab Abubakar of the Federal High Court, Abuja empowering NDLEA to detain him for 14 days in the first instance.

In an application filed by his lawyers, Kyari wants the court to set aside the order for his detention, arguing that the order was issued without him being accorded a fair hearing.

The court has scheduled a hearing in Kyari’s application for March 8.

Charles Igbinidu is a Public Relations practitioner in Lagos, Nigeria
@https://twitter.com/ionigeria
Previous 4 contenders to buy Chelsea from Britain’s richest man to Conor McGregor
Next Russia’s wealthiest man hit by EU sanctions because of his ties to Putin and Russian officials