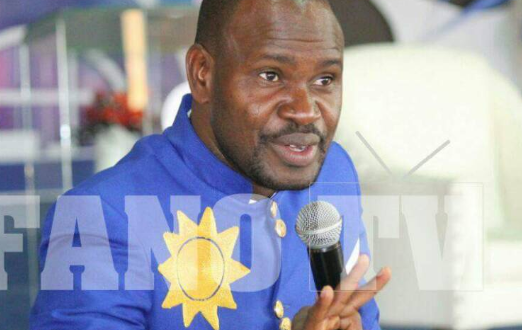 Nigeria Will Experience Terror Worse Than Herdsmen Attack In 2019 – Prophet

South African Based Nigerian Prophet, Samuel Akinbodunse has dropped a shocking prophecy about Nigeria and 2019 election once again. The Freedom for all Nation Outreach General Overseer made it known that Nigeria will experience another sect of insurgence worse than Fulani Herdsmen in a Live service at his South Africa church.

He revealed that God showed him in a vision, a house heavily guarded by security agents, but peeping into it spiritually, he saw the house loaded with Ammunitions in preparation for 2019 elections.

Meanwhile, he stated that the Chosen President by God will be a young person and that God made Buhari the President because he wanted Nigerians to Learn.

Furthermore, he also warned South Africa security operatives to be extra  vigilant as he sees violence and riots across the country.

The man who accurately predicted Zuma’s exit and Mugabe’s disgrace from the seat of power claimed South Africa should forget about peace for now till after 2019.

He revealed that the identity of the sponsor of these series of violence would be revealed by the election period.

” The police and soldiers should get ready. There would be more riot across the country till 2019 election.  South Africa should forget about peace for now until after the election. What is happening is being sponsored by a man in secret and his identity would be revealed after the election.

I saw more road blocks and owners  of shops should get unbreakable padlocks to secure their shops and protect their wares. I see security operatives across the country trying to quench the riot across the country.

It would be recalled that months back, he revealed that if President Buhari tries to contest for presidency in 2019, he will die.