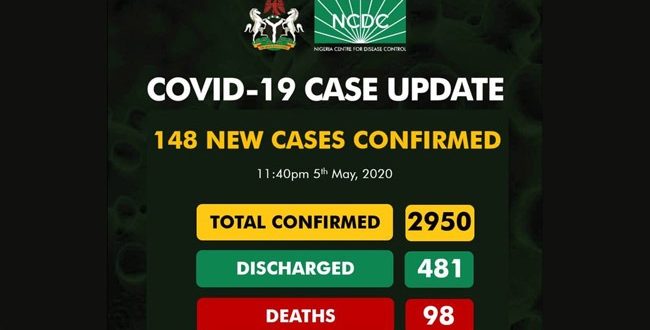 The Nigeria Centre For Disease Control (NCDC), has confirmed 148 new COVID-19 cases in the country, taking Nigeria’s total cases to 2,950.

Ten are in the FCT, nine in Katsina, seven in Taraba, six in Borno and Ogun, five in Oyo, three in Edo, Kaduna and Bauchi, two in Adamawa and Gombe, and one each in Plateau, Sokoto and Kebbi.

481 patients have recovered so far and have been discharged, while 2,371 remain active in the country.

The number of samples tested stands at 19,512, while 98 persons have died.

The novel coronavirus has killed at least 254,532 people since the outbreak first emerged in China last December, according to a tally from official sources compiled by AFP at 1900 GMT on Tuesday.

The tallies, using data collected by AFP from national authorities and information from the World Health Organization (WHO), probably reflect only a fraction of the actual number of infections.

Many countries are testing only the most serious cases.

The countries with the newest fatalities in the past day were the United States with 1,830, Britain with 693 and France with 330.

Please note that because of corrections by national authorities or late publication of data, the figures updated over the past 24 hours may not correspond exactly to the previous day’s tallies.