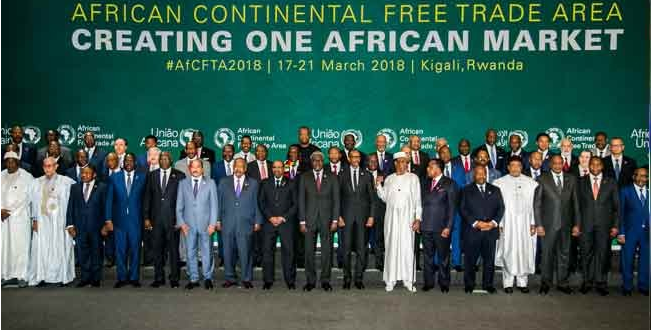 44 African countries yesterday signed an agreement establishing a free trade area. The signing took place in Kigali, Rwanda. According to the African Union , the Continental Free Trade Area CFTA will in no small measure boost the continent’s economic development.

The creation of the Continental Free Trade Area CTFA,  which is said to be the world’s largest in terms of participating countries, comes after two years of negotiations and is one of the AU’s flagship projects for greater African integration.

Nigeria was conspicuously absent from the signatories after President Buhari last week pulled out, saying he needed more time for consultations at home. The Federal government hesitated after objections from business leaders and unions.

“Some countries have reservations and have not finalised their national consultations. But we shall have another summit in Mauritania in July where we expect countries with reservations to also sign,” said Albert Muchanga, the AU Commissioner for Trade and Industry.

Economic powerhouses like South Africa, Kenya, Morocco, Egypt, Ethiopia and Algeria  were among the country’s that signed the deal yesterday.

Previous “I Wanted To Safe For My Education” – Arrested Sex Worker Says
Next Poverty!!! See Man Dressed As Lady To Get Free Beer, Shawarma And Suya At Nightclub