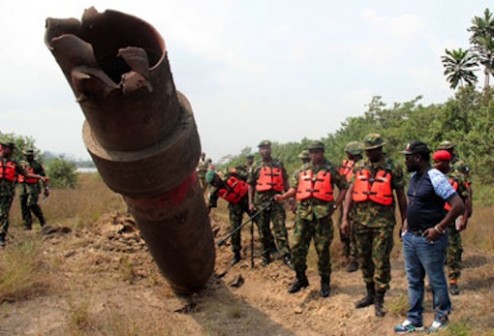 There are indications that efforts by the Federal government to negotiate with the Niger Delta Avengers may have run into stormy waters as the militant group revealed on Thursday that it has blown up a Nigerian National Petroleum Corporation (NNPC) pipeline in Oruk Anam Local Government Area of Akwa Ibom State.

The NDA, via its Twitter account said, “At 4:00am @NDAvengers blow up NNPC Pipeline in Oruk Anam Local Government Area in Akwa Ibom.”

But Akwa Ibom police commissioner Murtala Mani told reporters in the state capital, Uyo, that the explosion was caused by a gas leak and engineers were working to repair the damage.

This is coming up after the NDA had on Monday given a number of conditions that it expects the Federal Government to meet before it would engage in any form of dialogue.

The group, through its spokesperson, wants the home countries of international oil companies operating in the Niger Delta to be involved in the peace process with independent foreign mediators.

It also says the sincerity of the Nigerian government is paramount and would be a major factor that would determine if its call for dialogue would be successful or not.

The group also warned the Federal government, oil companies and their services firms not to carry out any repair works and suspend the buying of crude oil from the Niger Delta region pending the creation of “the right atmosphere that will engender genuine dialogue”.