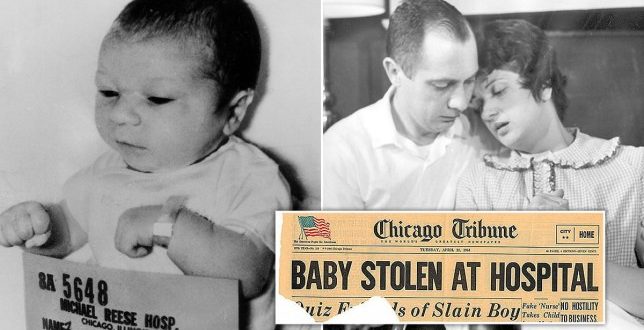 In 1964, a woman dressed as a nurse took one-day-old baby Paul Fronczak from his cot and never returned (Picture: Chicago Tribune/Getty/AP)

Fifty-five years after a newborn baby was abducted from Chicago’s Michael Reese Hospital, investigators have found him living in rural Michigan.

The April 26, 1964 abduction captivated the United States of America.

One day after Chester and Dora Fronczak became the proud parents of the baby boy, a woman wearing white and appearing to be a nurse entered Dora Fronczak’s hospital room and said she would take the baby to see the doctor. She never returned.

The FBI enlisted the help of local police — even mail carriers — in a desperate search for the child. Days turned to weeks. Weeks into months. More than two years later, the FBI was contacted about an abandoned boy found in New Jersey.

It was decades before DNA testing, and law enforcement thought the boy they found had ears similar in shape to the Fronczak baby. Newspaper accounts at the time quote Dora Fronczak as saying “that’s my baby, it’s Paul!” The Fronczaks raised the baby as their own.

Then, in 2014, a television station KLAS-TV reported the person who thought he was Paul Fronczak had taken a DNA test that proved he wasn’t.

“I’d like to know who I am, my birthday, how old I am? But more important: Is the real baby alive and still out there,” Fronczak said in a 2014 interview. “And if it is, can we find it?  Can we reunite it with my mom and dad?”

Several leads led reporters to a small town in Michigan and a man living under a different name.  At his request, his identity is still kept secret because he was a victim of a crime.

The man was aware of the evidence that concluded he was the baby abducted from a Chicago hospital more than a half-century ago.

He apparently learned about it several months ago and was still coming to grips with the ramifications.

“I have loose ends to tie up,” he told WGN, a US TV news channel, after disclosing a battle with cancer.

The man confirmed he had been contacted by FBI agents handling the Fronczak case. He wouldn’t say whether he planned on meeting with his biological mother, Dora Fronczak. His father, Chester, died several years ago.

The FBI has investigated the case on and off for 55 years. FBI Chicago spokesperson Siobhan Johnson declined to comment when asked whether agents have confirmed the man in Michigan is Paul Fronczak; but offered this statement:

Dora Fronczak, who lives in Chicago’s suburbs, declined to comment.