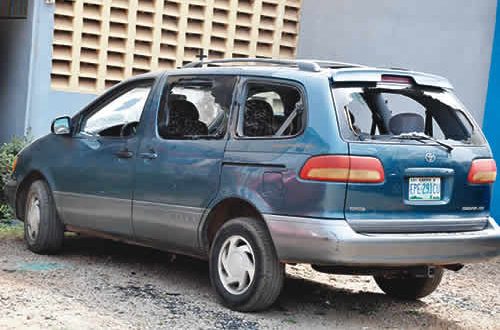 Not less than 20 persons have been reportedly murdered by gunmen who went house-to-house in Omoku, the headquarters of Ogba-Egbema-Ndoni local government area and other adjoining villages killing and in some instances wiping out an entire family.

The incident happened at about 2 am on Monday.

It was gathered that the victims had earlier gone to their various churches to pray into the New Year and were coming back when they were ambushed.

Other people also reportedly sustained gunshot injuries and were rushed to hospitals by other residents of the community.

Some of those killed during the mayhem were said to be four members of a family, including a man and his wife.

The incident, according to a resident of the area, who identified himself simply as Ukandu, occurred at two places in the area – Omoku and Aligwu.

Ukandu said the fireworks that usually greeted the New Year made it almost impossible for residents to notice that hoodlums were shooting residents.

He said, “We were shocked to see some corpses in Aligwu and Omoku. About 14 persons were killed; and some of them were shot at close range.

There were, however, conflicting reports on the number of those who sustained gunshot injuries as some put the number at 24, while others said it was about 30.

The state Police Public Relations Officer, Mr. Nnamdi Omoni, confirmed the incident and said the Commissioner of Police, Mr. Ahmed Zaki, had ordered a manhunt for the perpetrators of the crime.

The police spokesman added that he could not immediately speak on the number of casualties of the incident because he had yet to be told.

“I can confirm the incident, but at the moment, we cannot confirm the number of casualties. The Deputy Commissioner of Police in charge of Operations and heads of police units have been mobilised there to restore peace.

“The Commissioner of Police, Ahmed Zaki, has ordered a manhunt for the hoodlums so that they can face the law.”

A Port Harcourt based dancer known as Rokky was also found dead this morning. He was among those who shouted “Happy New Year” at midnight only to be found dead in the morning. He was said to have been be hit by a stray bullet in Abonnema, Akuku Toru LGA of Rivers State.

The Kaduna State Government has directed the security agencies to investigate the assassination of Etum Numana, His Royal Highness, Gambo Makama,his wife on new year eve and bring the assailants to justice. A statement issued by Governor Nasir El-Rufai’s spokesman, Samuel Aruwan, urged the people of Numana Chiefdom in Sanga local government area to remain calm and to support the security agencies as they investigate the latest threat to the hard-won peace in the area.

According to the statement, security agencies have confirmed that the Etum Numana was killed along with his wife at their residence in the early hours of 1st January 2018 by yet unknown assailants to justice.

The statement further said,security agencies have also taken necessary measures to assign more personnel to the area to keep the peace. “The Kaduna State Government has received with sadness report of the killing of the Etum Numana, His Royal Highness, Gambo Makama. Security agencies have confirmed that the Etum Numana was killed along with his wife at their residence in the early hours of 1st January 2018 by yet unknown assassins.”

“The late Etum Numana was a peacemaker who was committed to peace and development in his chiefdom. The government commiserates with the immediate family of the royal father and his wife, the people of Numana Chiefdom and the entire Sanga Local Government.”

The statement added:”government condemns this double murder as a calculated threat to peace, and a most unfortunate attempt to intrude into a new year a pattern of criminality that needlessly threatens the right of citizens to security, life and liberty.” All those with useful information are enjoined to forward to the relevant security agencies and the information will be treated with utmost confidentiality.”

Scores of people were on Monday injured after an attack on both Christian and Muslim worship centres allegedly by youths from the Taiwo Isale area of Ilorin, Kwara State.

There was, however, no report of any death.

It was gathered that the youths were prevented by the community leaders in the area from embarking on what they termed, ‘New Year carnival,’ around 2am for fear of the carnival turning into a security threat, owing to previous experiences.

Sources said the youths resorted to throwing bangers indiscriminately at all gatherings in the vicinity, including religious gatherings celebrating the New Year.

It was gathered that churches in the area and  a Muslim group, called Quareeb, were attacked.

Property belonging to the churches and the United Secondary School in Taiwo Isale were also damaged.

A statue of Mary was burnt, while another was smashed at the St, Joseph Catholic Church, Taiwo Isale. Some windows and other property of the church, as well as a car were vandalised.

Also, the building where some Muslims were holding a session was vandalised, while some of the faithful were injured.

Ahmed in a statement by his Chief Press Secretary, Abdulwahaab Oba, described the attack as criminal, satanic and alien to the state.

He commended people who protected some of the victims regardless of their religious inclination.

He also called on security agencies to investigate the incident and unravel the perpetrators of the “unholy act” with a view to bringing them to book.

Ahmed said, “Peace is sine qua non for the development of any society and the government will not tolerate any act capable of breaching the peace, unity and tranquility of the state.”