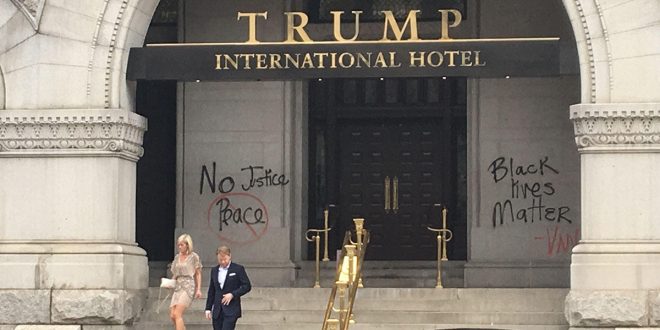 Police received a call around 4 p.m. Saturday for a report of destruction of property in the 1100 block of Pennsylvania Avenue. When they arrived, they found the words “Black Lives Matter” and “No justice” and “Peace” cancelled out with a red circle and slash.

The suspect, allegedly a man in a yellow shirt and blue hat, was caught on video spray-painting the words “Black Lives Matter” on the side entrance of the hotel along 12th Street, police said.

Donald Trump’s 263-room hotel had a soft opening in September, replacing the Postmaster General’s building. Trump’s company received a 60-year lease by the federal government in a deal to restore the landmark building. Its official opening is set for late October, and the Trump family is expected to attend.

Police have not apprehended the suspect and ask anyone with information to contact 202-727-9099.

Charles Igbinidu is a Public Relations practitioner in Lagos, Nigeria
@https://twitter.com/ionigeria
Previous Being lazy is a sign of high intelligence -Research
Next Edo PDP set to challenge Obaseki’s election at the tribunal