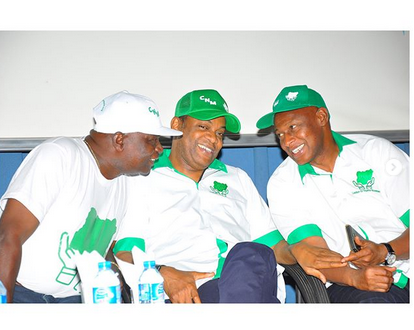 Barely two weeks after former President Olusegun Obasanjo dismissed the two major political parties (APC and PDP) and advocated for the formation of Coalition for Nigeria Movement which will serve as the THIRD FORCE in the country, Yesterday, Januray 31, 2018, the Movement was launched at the Shehu Yar’Adua Centre in Abuja.
While the coalition dismissed insinuation that it was rolling out Mr. Obasanjo’s script, prominent politicians and youth leaders at the even disclosed that it is an independent movement aimed at moving Nigeria forward. Prince Oyinlola said “the time has come that the youths should take the lead while the elders only provide guidance.” He also said the time is now for youthful politicians and other youth leaders from across the country to take their destinies in their own hands and save Nigeria from collapse.

Former governor Donald Duke in his remarks said sincere politicians were few in the country. “What we have are those who just want to get to power, and they need just any political party”, he said. He called on the youths to join the movement and rescue the country. He reiterated that the youths would be the leaders of the movement, not any old politician.