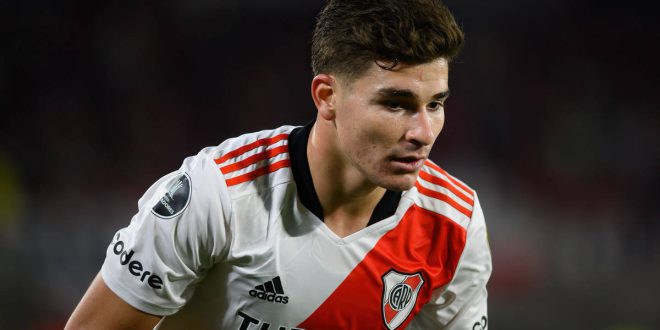 MANCHESTER CITY fans have joked why did they sign Erling Haaland after incoming striker Julian Alvarez scored a DOUBLE hat-trick for River Plate.

The Argentine forward, 22, agreed a deal to join the Citizens in January, with the player remaining on loan at River until the summer.

Alvarez has earned a reputation of being a lethal marksman in South America having banged in 24 goals last season.

And he has found the back of the net 14 times from 17 games in all competitions this term – with SIX of those strikes coming on Wednesday night.

The 2021 Copa America champion created club history when he scored a double hat-trick in their 8-1 Copa Libertadores group stage win against Alianza Lima.

Alvarez scored three goals in either half against the Peruvian outfit to become the first player in River’s 121-year existence to score that many times in a single match.

He is just the second player in Copa Libertadores history to score six goals in a single match since Juan Carlos Sanchez in 1985.

Commenting on the historic achievement, River tweeted: “Julian Alvarez, the first River player to convert 6 goals in the same match.

“121 years and history is still being written…”

His stunning display has left Citizens fans joking that they shouldn’t have triggered Erling Haaland’s release clause at Borussia Dortmund.

One user tweeted: “Who needs Haaland?”

A third added: “I think this is the point in my life I start to get worried of who will start between Haaland and Alvarez.”

This fan then quipped: “Alvarez saw the Haaland hype and wanted to remind us he’s coming home too.”

One then stated: “Been saying this, Julian Alvarez will adapt to our team faster than Haaland.”

Alvarez is set to play a big role under Pep Guardiola at the Etihad next campaign after the club confirmed they have rejected multiple loan offers.

Chief executive Ferran Soriano said: “We have had many offers from clubs to loan Julian Alvarez — but he is not going to leave.

“He will do the pre-season with us and I think he will stay. Barcelona were not among those who were interested.”