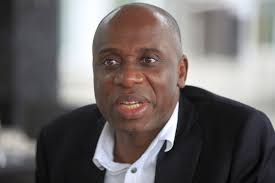 Minister of Transportation, Rotimi Amaechi has denied the allegation that he approached Justice of the Supreme Court, Inyang Okoro over any case.

Amaechi described the allegation by the judge as a figment of his imagination.

Justice Inyang Okoro, who is among the seven judges arrested by the Department of State Service between October 7 and 8, pointed accusing finger to the former Rivers governor, as the one who instigated his ordeal.

Mr. Amaechi, in a statement by his media office, asked the judge to respond to the corruption allegation levelled against him.

The statement said, “This accusation from Justice Okoro against Amaechi is a figment of his imagination, concocted to obfuscate and politicise the real issues for his arrest and DSS investigation of allegations of corruption against him.

“The claims by Justice Okoro against Amaechi are blatant lies, bereft of any iota of truth or even logic. Amaechi did not, and has never approached Justice Okoro in respect of the cases Okoro mentioned or any other case.

“This is a cheap attempt, albeit, political move to drag the name of Amaechi into something he knows nothing about.

“Justice Okoro should face his issues and leave Amaechi out of it. He will be hearing from our lawyers.”