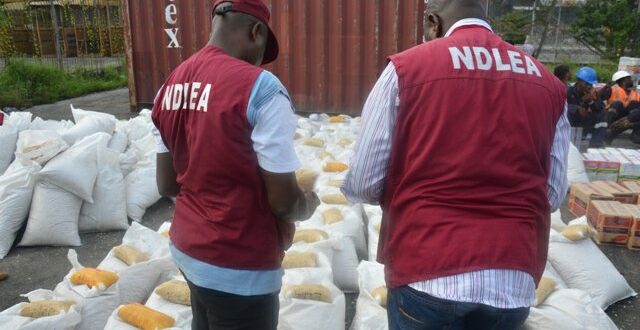 The agency made the disclosure of the arrest in a statement, released by Mr. Femi Babafemi, its Director, Media and Advocacy, on Sunday in Abuja.

Bababfemi said that the suspect had been linked to several trafficking in illicit drugs to London, United Kingdom, through the Murtala Muhammed International Airport (MMIA).

He noted that the suspect had been on bail, granted by a Lagos State Federal High Court after he was arraigned in November 2020 over a charge of an attempt to export 15.700kgs of Methamphetamine to Australia.

Babafemi said the agency has since then been investigating the suspect’s activities linked to recent multiple attempts to export illicit drugs to the UK which culminated in his arrest on Tuesday, Nov. 2.

According to him, the suspect had on him 78 parcels of Cannabis, concealed in black soap packs labelled as Dudu Osun, with a total weight of 12.250 kilogrammes while attempting to fly to the UK.

Bababfemi said that further investigation revealed that the suspect had been behind the attempt to export 7.350kgs of Cannabis to the UK on Thursday Oct. 21.

He said that officials of the Nigerian Aviation Handling Company Plc (NAHCO) export shed at the MMIA,
intercepted the consignments.

Bababfemi said “curiously, a separate investigation by operatives of the Directorate of Operations and General Investigation, (DOGI,) of the Agency, attached to courier companies, have equally traced two other attempts to the suspect.

“An attempt to export 47.7kgs of cannabis to the UK through courier firms, to Okoli after his agents were arrested in the course of investigation, named him as the owner of the consignments,” he said.