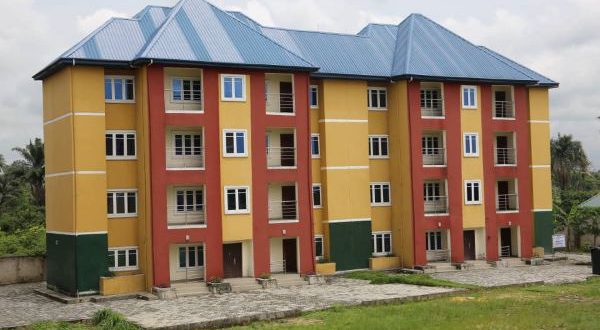 The House Donated by NDDC

The Niger Delta Development Commission (NDDC), has, in pursuant to its corporate social responsibility, boosted the waning morale of the Nigeria Police Force, with the donation of housing units to the Special Protection Unit of the Police.

The project, renamed President Muhammadu Buhari Nigeria Police (Special Protection Unit) Bade 6 Barracks, is located at Omagwa in Ikwerre Local Government Area of Rivers State, comprises 68 standard blocks of flats. This is in addition to features such as a gatehouse, Admin Building and Commandant Quarters, among others.

While speaking to journalists in his office in Abuja recently, the Hon. Minister of Niger Delta Affairs, Senator Godswill Akpabio, announced that the project would be commissioned by President Buhari this Tuesday.

The Hon Minister expressed appreciation to Mr. President for seeing to the eventual completion of this all-important project after 7 years it was abandoned.

The Hon Minister stated that President Buhari’s special interest in the project was anchored on the president’s commitment to boost the work of the Nigeria Police Force in the Niger Delta, as well as efforts at facilitating sustainable regional development.

While reassuring the people that the new NDDC is renewing the confidence of Niger Deltans in Government’s seriousness to bring development to the communities, the Minister expressed the hope that the project would boost the morale of the Nigeria Police Force in the maintenance of law and order in the society.

It would be recalled that following deafening outcries of people of Niger Delta, over the rot in the Niger Delta Development Commission, especially in the areas of non-execution of and abandonment of projects duly awarded to contractors, Citizens Quest for Truth Initiative (CQ), embarked on several quests to situate the veracity or otherwise of the outcries.

The non-governmental organization on the 25th day of July 2019 visited the project site. With the physical assessment of the state of the abandoned project, Citizens Quest articulated and used its broad media platforms to call the attention of the federal government to the deplorable state of the project.

Reacting to the news of the completion and planned official commissioning of the project, the founder/President of Citizens Quest for Truth Initiative, Chief Obiaruko Ndukwe, thanked the Hon. Minister of Niger Delta Affairs, Senator Godswill Akpabio, for following through his assurance to the CQ that the project would be given expeditious attention. She also commended the sole Administrator of the Commission, Mr. Effiong Akwa, for acting true to power in seeing to the delivery of this project.