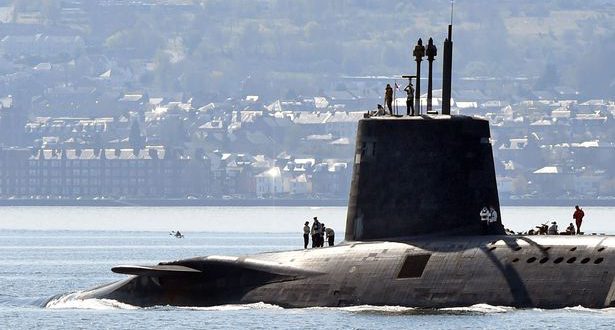 Russia’s President yesterday warned he would mount a “lightning-fast” retaliation if the west intervened in Ukraine, warning “we have all the tools” and “we will use them if necessary”.

In February Putin ordered Russia’s nuclear weapons to be put on high alert and he has made several hints since about the country’s nuclear arsenal.

One of Britain’s Trident nuclear submarines leaves on deterrent patrol from the Clyde Naval Base, Scotland

Mr Wallace, however, told LBC Radio: “I don’t feel rattled by it.

“Because we have strong Armed Forces and a nuclear deterrent and we’re part of a Nato partnership of 30 nations who outgun him, outnumber him and have potentially all the capabilities at our disposal.

“I don’t fear him. I think we should be very grateful in this country that we have a nuclear deterrent, I think that is a really important part of his calculations.

“There are many, as we know, who wanted to get rid of it over the years.

“I’m very grateful that somewhere under the sea, some amazing men and women are deep underwater, hiding, waiting, in case Britain needs to be protected. That’s important”

Russia has told the United States to stop sending arms to Ukraine, saying large Western deliveries of weapons were inflaming the conflict.

Moscow has also hit out at the UK for saying Britain would support Ukraine’s right to hit Russian military targets on Russian soil, using UK weapons.

Addressing lawmakers in St Petersburg on Wednesday, Putin said according to video supplied by Russian media: “If someone intends to intervene in the ongoing events from the outside, and create strategic threats for Russia that are unacceptable to us, they should know that our retaliatory strikes will be lightning-fast.

“We have all the tools for this, things no one else can boast of having now. And we will not boast, we will use them if necessary. And I want everyone to know that.”

Britain last night demanded “cancerous growth” Vladimir Putin’s forces are pushed out of all Ukrainian territory – including Crimea, which they invaded eight years ago.

Putin has made nuclear hints before ( Image: via REUTERS)DON’T MISS

Foreign Secretary Liz Truss made the clearest statement yet of the UK’s intentions – as she warned the war may last a decade.

Ms Truss said in a speech at Mansion House, in the City of London: “We are doubling down. We will keep going further and faster to push Russia out of the whole of Ukraine.”

“The international community has condemned Russia for its invasion of Crimea, which was illegal in 2014.