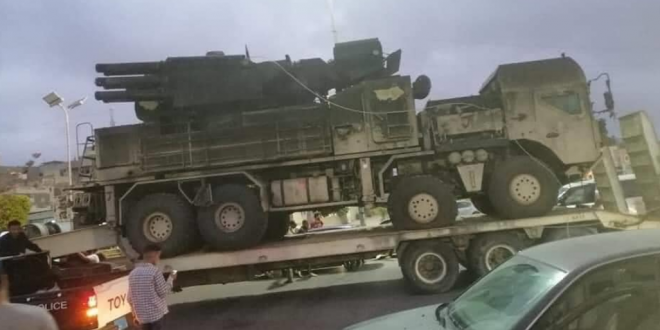 On Monday, May 18th, Units of UN-recognized Libyan Government of National Accord  managed to establish control over the Al-Watiyah air base, forcing the Libyan National Army to retreat. The air base turned out to be a treasure of military equipment, from light weapons to Su-22 bombers and, most significantly, a Pantsir-S1 system that sustained some surface damage in an air strike carried out by Turkish drone.

The discovery of Pantsir-S1 sent the GNA and Turkey supporters into frenzy, making them to declare “capture of a Russian missile defense system”.

This agitation of outlets and social media users loyal to GNA was downplayed by military experts and analyst who were quick to point out that the captured system was actually mounted on MAN-SX 45 truck, a clear evidence of it being an export modification supplied to the United Arab Emirates. Abu-Dhabi is known for its staunch support of the LNA leader Khalifa Hafter, and LNA units are often seen with UAE-provided equipment. Moreover, first reports of Pantsir supplies from UAE to Libya surfaced as early as June 2019.

This theory was further proved by the statements made by GNA officials themselves. Spokesman for the GNA Foreign Ministry Mohammed Al-Giblawi openly claimed that the captured Pantsir was given to LNA by the UAE, accusing Abu-Dhabi of providing support to Khalifa Hafter, thus ending the controversy over the system’s origin.

Abdallah Samir is a journalist covering the Middle East issues, especially the Syrian and Libyan crisis