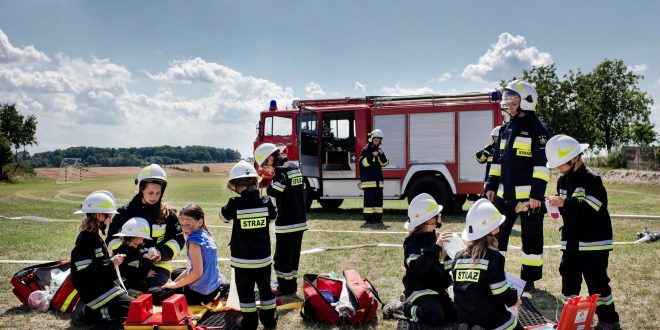 The all-girl young volunteer firefighters team in the village of Miejsce Odrzanskie, Poland.CreditCreditKasia Strek for The New York Times

Mysterious village where a boy hasn’t been born for a decade, Mayor promises cash reward for first family to produce a son

A PLACE dominated by women was once the stuff of ­Hollywood fiction.But a village in Poland is baffling scientists, with no boys being born for almost ten years

It was during a competition for junior firefighters that somebody first noticed something unusual about the small Polish village of Miejsce Odrzanskie. Every single one of the uniformed children showing off their skills was a girl.

The reason is as simple as it is surprising. No boys have been born in Miejsce Odrzanskie for almost a decade, while the village’s women in the rural backwater of 300 souls have given birth to 12 girls.

The boy shortage is so acute that the mayor has offered a cash reward for the first family to produce a son. The world’s media have descended on the village in the fields of south-west Poland not far from the Czech border to investigate the phenomenom.

“Some scientists have expressed interest in examining why only girls have been born here,” said Rajmund Frischko, the mayor of the commune of Cisek, which includes the village. “I also have doctors calling me from all over the country with tips on how to conceive a boy.”

He said he had just spoken to a retired doctor from central Poland who said that a baby’s sex depended on the woman’s diet, which should be rich in calcium if she wants to have a boy.

“And if that doesn’t work,” the mayor laughed, “there is always the tried way of the Polish highlanders: If you want a boy, keep an ax under your marital bed.”

In the years since the last baby boy was born, there have been 12 births in the village, an agricultural community on the edge of the smallest and least populated province in Poland. Residents do not know what accounts for the anomaly, but many think it might all just be a coincidence, like a run of coin flips turning up heads.

Mr. Frischko has decided to offer a reward for the next couple who have a boy.

“There has been so much talk about us in the media that for a minute there I was considering naming a street after the next boy born here,” he said. “He will definitely get a very nice gift. And we will plant an oak and name it after him.”

Like so many other Polish villages, this one has seen a steep decline in population. After World War II, it had about 1,200 people; now there are 272.

Charles Igbinidu is a Public Relations practitioner in Lagos, Nigeria
@https://twitter.com/ionigeria
Previous Parents of man murdered by wife offer her £40,000 for custody of grandson
Next EFCC arrests female suspect on FBI list in Edo State