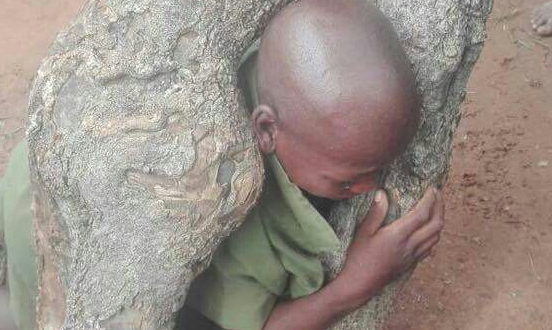 Spread the love
A boy who attends one of the rural primary/community schools in Luapula Province of Zambia, has been trapped in a tree cleft while he was playing.
A Facebook user identified as Andrew Mwansa, who posted the incident, wrote;

“According to a whats-app message, the boy belongs to one of the rural primary/community schools in Luapula Province. A school boy was trapped in a tree cleft whilst playing. The old men have long been advising the children not to play around the feared tree but as usual, children disobeyed the order. The villagers have long believed that the tree is spiritual and has resisted uprooting for many years. Efforts by community school trs to rescue the boy failed as the more they tried to pull him out, the more squeezed he was getting until the grey haired old men and women went there to plead with the spirits of the tree to free the boy as he was innocent. After a black chicken sacrifice, the tree freed the little boy and he was back in class learning happily. Surprisingly, he was found without a scratch.”