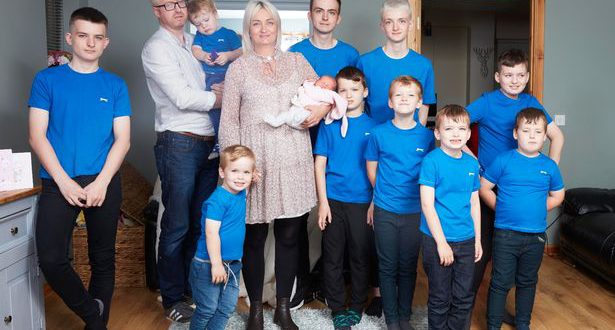 Alexis Brett, who lives in the Scottish Highlands, had ten boys before she had her first girl, and since then she’s welcomed another boy in the family – now she’s pregnant with her 13th, and last, baby.

Some parents are keen to have both a boy and a girl, and will sometimes have more children than they planned to get one of each – but one mum’s taken that to the extreme.

Alexis Brett, 42, had ten boys in a row and while many would have resigned themselves and given up by that point, she carried on trying for a baby girl.

She was relieved when a scan detected her 11th child would be a girl and in 2019 baby Cameron was welcomed into the family – and since then Alexis has had another boy, Orran.

But Alexis and her partner, 47-year-old David, a retired train driver, didn’t stop there and now they’re having baby number 13 – and as luck would have it, it’s another girl.

Now Alexis, who’s a stay-at-home mum, says that she’s had enough and her 13th child will be her last.

She said: “I’ve had another boy and I’m due another girl on the 13th of this month. The family was big before but it’s even bigger now.

“It never bothered me whether it was a boy or a girl, it was just a shock – it was shocking this time too.

“She’s called Cameron, I don’t know what I’ll call the new one – I’ll decide when she gets here.

“Cameron is three at the end of this month – looking after her, there are some differences, but it’s about the same as the boys.

Alexis and David have quite a big family ( Image: Caters News Agency)

Alexis said that David has now retired and while he takes care of the shopping for the family, going out on day trips with 12 children can be tricky.

She continued: “My husband had to retire last year, but I shan’t be going back to work with 12 kids around here.

“He does most of the shopping, my second boy drives and he can take me when I need to go.

“Summer holidays are a challenge because we have them all at home. We’re on our fifth week now and everyone’s a bit bored. We go to the park, go swimming, to the beach, that sort of thing.

“Going to the park or beach is fine, swimming is a bit more of a challenge.

Alexis has to do 49 loads of washing every week ( Image: CATERS NEWS AGENCY)

“The oldest ones don’t always come with us because they’re teenagers, we only have six that go out – we can go out in one car, more or less.

“We have five bedrooms, we have three in one room and all of them share.

“The elder ones aren’t stuck in with the wee ones, the wee ones stick together – the teenagers are fine together and the younger ones give them space.”

After having 10 boys in a row, Alexis was shocked to learn she had a girl on the way and would no longer be living in an all-male household.

Speaking at the time, she said: “We’re over the moon.

“I’d been expecting to hear we were having another boy. But when I found out it was a girl, my face was a picture.

“I was shocked, but delighted. Now she’s here with us, it’s a fantastic feeling.”

Cameron instantly had a remarkable effect on her brothers, who ranged in age from two to 17.

Dad David said: “They’ve generally been much better behaved around her, trying to keep quiet in case they wake her up.

“They also want to help with holding and feeding her – it’s been great.”

Alexis had said: “We’re definitely stopping now. There’ll be no more. I said that last time, but this time I absolutely mean it. I love my family as it is now.

“Of course, we do get comments about the number of children we have – especially when I was pregnant again.”

It was Christmas Eve, as the family were all getting over a sickness bug, that Alexis realised hers seemed to be lingering longer than everyone else’s – and took a home pregnancy test to confirm the news.

With their 11th child, the couple, from Dingwall, decided not to wait until the birth to find out the sex – and instead had a gender scan at a clinic 50 miles away in Elgin, Moray.

Alexis, who has spent more than eight of the last 18 years pregnant, said: “When the results came, Harrison opened the envelope, I was too nervous. We were amazed it was a girl.”

But only child Alexis is adamant she was not holding out for a daughter.

She said: “All my sons are special to me – if another boy had been on the way it wouldn’t have bothered me. We’re asked a lot if we had so many children because we were hoping for that elusive girl.

“I can honestly answer ‘no’. Cameron wasn’t planned, but I was happy all the same. Luckily all my pregnancies have had little or no drama.

“I’d never planned to have a large family, but now I do, I love it.

“I always joked I wouldn’t have a clue what to do with a girl… that’s all changed. We’re having a lot of fun buying pink things for the first time.”

Alexis reckons she is “immune” to most birth control – and is now contemplating getting sterilised.

After Cameron’s birth, she planned to return to her new job as a part-time fitness instructor.

Her day usually begins at 5.30am – she uses the “quiet” time for a coffee and a shower before the children start to emerge for nursery and school. Alexis does 49 laundry loads a week, and vacuums seven times a day.

She said: “It’s not easy with so many boys running around, but I like everything neat and tidy. I can’t stand mess.”

As she speaks, her youngest boy drops crumbs as he munches a Mini Roll – and out comes the dustpan.

Despite his daily health battle, he says of his huge family: “I wouldn’t have it any other way. I always try to have time for each of our boys.

“Medication helps with the symptoms, which are thankfully still minor.

“It’s difficult to have a holiday as one group, that’s not happened for years.

“The seven-week school summer holidays can also be an endurance test – most of the time they’re just happy on their Xbox or Wii Switch.”

Just inside the front door of the family’s five-bedroom detached home, around 40 pairs of Adidas and Vans trainers, as well as school shoes and Hunter wellies of all sizes, are stacked neatly on a shoe rack.

They have to buy at least three pairs of shoes every few weeks. David said: “We don’t tend to do hand-me-downs, there’s no point. Being boys, their clothes never seem to last.”

Although the family have a seven-seater people carrier and a five-seater Range Rover, Alexis cannot drive.