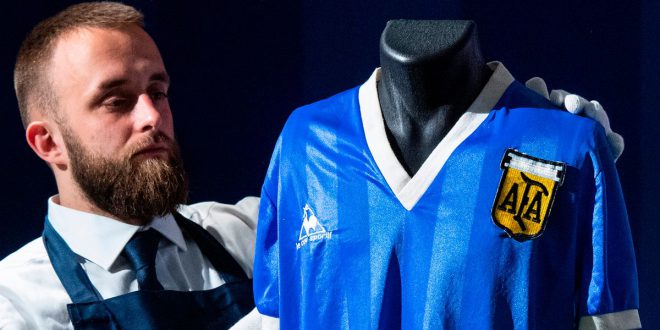 Diego Maradona's match shirt from the 1986 World Cup has become the most expensive football shirt in history (Image: Elliott Franks)

As the Argentina legend Diego Maradona’s ‘Hand of God’ match shirt has smashed records with its £7.1 million sale, we take a look at some of the priciest shirts in football history

Diego Maradona’s shirt, which he wore during the ‘Hand of God’ match against England, has broken records as the world’s most expensive football shirt.

The shirt was sold by former England midfielder Steve Hodge and went for a massive £7.1 million

Hodge had owned the shirt for 36 years after swapping it with Maradona at the end of the controversial 1986 World Cup game, which saw Argentina secure a 2-1 victory over England in the quarter-finals.

Although no other football shirts come close to the £7.1 million that Diego’s was worth, there’s been a fair few that come with hefty price tags.

We take a look at some of the most expensive football shirts in history.

Maradona’s shirt that he wore in the famous ‘Hand of God’ match now tops the list as the world’s most expensive football shirt, after selling for £7,142,500.

During his opening goal in the match, Maradona and England goalkeeper, Peter Shilton, leapt to reach the ball, which touched Maradona’s left hand before bouncing into the net.

The sale of the shirt didn’t just break the record of the most expensive football shirt ever sold, it also broke the auction record for an item of sports memorabilia, previously held by the 1892 Olympic manifesto.

Before the recent sale of Diego Maradona’s ‘Hand of God’ shirt, it was Pelé’s Brazil shirt from the 1970 World Cup that took the top spot of the world’s most expensive football shirts.

The Brazilian legend wore the shirt during the World Cup final against Italy and it sold at auction for a whopping £157,750 in 2002.

Pelé scored a goal in the shirt during the final, partly contributing to its massive value. But the sale still exceeded pre-auction estimates as it went for three times the amount they thought it would.https://get-latest.convrse.media/?url=https%3A%2F%2Fwww.mirror.co.uk%2Fsport%2Ffootball%2Fmost-expensive-football-shirts-ever-26883302&cre=center&cip=18&view=web

The shirt was sold by former Italy international Roberto Rosarto, who also played in the final and swapped shirts with Pelé at the end of the match.

Who bought the shirt remains a mystery as the auction was won by an anonymous buyer via telephone.

The sale of Pelé’s shirt held the record for two decades, but just a few years before it was sold the record holder was Sir Geoff Hurst ’s 1966 World Cup shirt, which he wore in the final against West Germany.

Hurst scored an incredible hat-trick in the 4-2 victory that saw England win the World Cup for the first time.

It might be a step down from the auction prices of the shirts mentioned above, but there are plenty of retro football shirts that also fetch a decent price, like this ultra rate 1990 East Germany shirt.

The shirt is up for sale for £1,249.99, it’s believed to have been worn during a friendly match against Scotland at McDiarmid Park in Perth on 24th April 1990.

It was worn by former Bulgarian football forward Boycho Velichkov for the 1980 European Championship Qualifying Group 1 match against England.