Home / News / Local News / More than HALF of COVID-19 patients caught the virus from someone who was not showing any symptoms, study finds 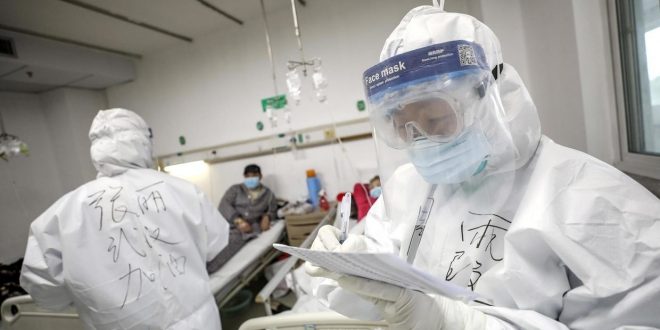 More than HALF of COVID-19 patients caught the virus from someone who was not showing any symptoms, study finds

More than half of people infected with the coronavirus caught it from someone who was not showing any symptoms, a study has found.

Academics in Ireland reviewed 17 global studies to estimate how much transmission occurs in the ‘presymptomatic’ period.

They found between 33 and 80 per cent of cases caught the virus from people who would have had no idea they were even infected.

It takes an average of six days before a person develops the tell-tale signs of COVID-19, which includes a fever and persistent cough.

But in those days prior to symptoms, patients are infectious and can pass the deadly virus onto others.

Transmission is most likely one day before symptoms start, the team concluded, but can happen as early as three days before.

Controlling presymptomatic spread is crucial for keeping on top of the disease when lockdowns are eased, experts said. It hinges on the success of contact tracing, which involves identifying all individuals who have been in close contact with a confirmed case.

COVID-19 has now killed 286,353 people worldwide, including an estimated 150 in the Nigeria, since the outbreak began in December.

Figures compiled by health authorities across the world also show 4.2million cases have been officially recorded.

But the true size of the pandemic, which has struck nearly every country across the world, will be several times higher due to a lack of widespread testing.

Scientists are urgently trying to understand how the virus, scientifically called SARS-CoV-2, spreads between people, which will help direct how to control it.

One of the studies was carried out in Wuhan, the Chinese city where the killer virus originated. Data was also used from Hong Kong, Singapore and Italy.

The studies had looked at the incubation period – the time between exposure to the virus and appearance of the first symptoms.

The average incubation period was 5.8 days, which is similar to the figure given by the World Health Organization (WHO).

People are not infectious and capable of passing the virus on to others during this whole period, just some of it.

The Dublin team said the majority of transmission appears to occur between three days before symptoms start and two days after.

On average, people are most infectious 0.67 days before symptoms appear, results of the studies suggested.

Researchers used this information and a mathematical equation to create an estimate for how many cases are the result of presymptomatic spread.

In one study involving 137 people in Tianjin, a municipality in China, presymptomatic spread was estimated to be blamed for around 80.7 per cent of all cases.

Looking at all the evidence, Ms Casey and colleagues estimated 56.1 per cent of transmission was from people before they showed symptoms.

The high variation of presymptomatic spread is expected, the team said, because the path of transmission and how it affects people naturally differs between locations.

But overall, a substantial amount of presymptomatic spread is contributing to the crisis, the authors warned.

It also backs previous estimates that pre-symptomatic people are responsible for up to 80 per cent of the spread of the virus.

The team said presymptomatic transmission alone can cause the virus to spread uncontrollably and ‘sustain an epidemic of its own’.

But there is still a high degree of uncertainty about the threat of presymptomatic spread because more research is needed.

The study did not analyse asymptomatic transmission, which is the spread of the virus from people who never show symptoms, otherwise known as ‘silent carriers’.

It has also not been critiqued by other scientists in a peer-review process, published on the website MedRxiv.

The team wrote: ‘These findings highlight the urgent need for extremely rapid and effective case detection, contact tracing and quarantine measures if strict social distancing measures are to be eased.’

Contact tracing has been proposed as a way of limiting the spread of coronavirus while lifting lockdown measures.

It involves identifying anyone who has been in close proximity to someone before they were diagnosed with COVID-19.

Those people would in theory be isolated, even if they do not have symptoms, so it’s not possible for them to pass the virus on to others during the presymptomatic period.

However contact tracing is a difficult task and relies on governments keeping on top of cases by interviewing them rapidly.

Charles Igbinidu is a Public Relations practitioner in Lagos, Nigeria
@https://twitter.com/ionigeria
Previous Nigeria has recorded 242 new cases of the novel coronavirus, bringing its total infections to 4,641.
Next Emir of Ilorin thanks Buhari for appointing his younger sibling, Prof. Gambari as Chief of staff