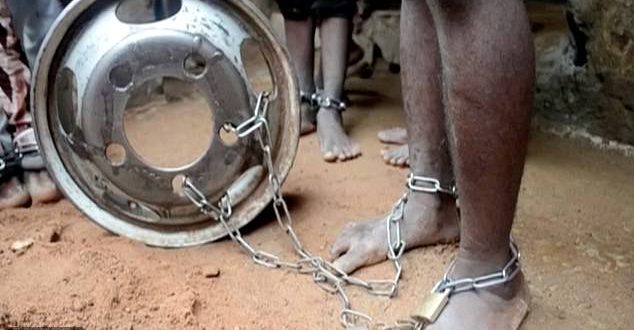 An Islamic boarding school has been revealed as a ‘house of torture’ after authorities raided the building to find its students were being detained and raped by staff.

Police discovered over 300 men and boys were being housed in the school in Rigasa area of Kaduna in northern Nigeria, and were regularly subjected to torture, sexual abuse, and starvation.

Students, who were of ‘different nationalities’, were chained, hung from the ceiling and beaten in a ‘torture chamber’ inside the school, authorities said. 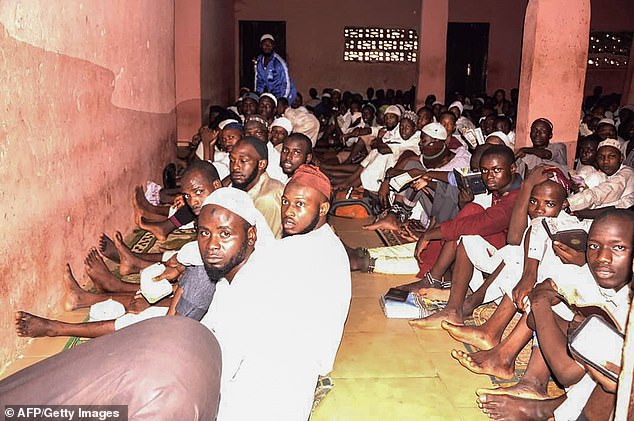 Shocking images from the Islamic school show rows of the male students wearing ankle shackles, while some also have their hands chained together. Other photos show the torture victims with horrific scars on their backs.

One victim described how previous students had died from being tortured

Kaduna state’s chief of police Ali Janga said it was a case of ‘human slavery’ and they raided the house after an anonymous tip-off on Thursday.

He told the BBC it was a ‘house of torture’ with men and boys from Burkina Faso, Mali and other African countries.

Police said the detainees were from Burkina Faso, Mali and other African countries.

The victims, including adults and minors, were kept in ‘the most debasing and inhuman conditions in the name of teaching them the Koran and reforming them’, Kaduna state police spokesman Yakubu Sabo said.

The school, which has been operating for a decade, enrolled students brought by their families to learn the Koran and be rehabilitated from drug abuse and other illnesses, police said

The proprietor of the school and six staff were arrested during the raid.

‘We found around 100 students including children as young as nine, in chains stuffed in a small room, all in the name of reforming them and making them responsible persons,’ Sabo said.

‘The victims were abused. Some of them said they were sodomised by their teachers.’

Bello Hamza, 42, told The Nigerian Tribune: ‘I have spent three months here with chains on my legs. I am supposed to be pursuing my Masters in University Pretoria South Africa. I got admission to study Applied Mathematics, but here I am chained.

‘They claim to be teaching us Quran and Islam, but they do a lot of things here. They subject the younger ones to homosexuality.

‘This is supposed to be an Islamic centre, but trying to run away from here attracts severe punishment; they tie people and hang them to the ceiling for that, but engaging in homosexuality attracts no punishment.’

He also said he has seen people die from the torture during his time there.

Police had been tipped off by complaints from local residents who became suspicious of what was happening inside the school.

During the raid on the school, police said they found a ‘torture chamber’ where students were chained, hung and beaten.

Sabo said the victims were of different nationalities and that ‘two of them said during interrogation they were brought by their parents from Burkina Faso’.

The identities of the rescued victims were being documented to determine where they came from and to contact their families.

Parents of some of the victims from within the city, contacted by police were ‘shocked and horrified’ when they saw the condition of their children, as they had no idea what was happening inside the school.

Parents were allowed to visit their children every three months, but only in select areas of the premises.

‘They were not allowed into the house to see what was happening… the children are only brought to them outside to meet them,’ Sabo said.

‘All they thought was their children are being taught the Koran and good manners as they looked subdued,’ he added.

Charles Igbinidu is a Public Relations practitioner in Lagos, Nigeria
@https://twitter.com/ionigeria
Previous Man claims to have killed 10 people because he was sexually frustrated
Next Rape case: More shocking revelations emerge on Fatoyinbo (Video)