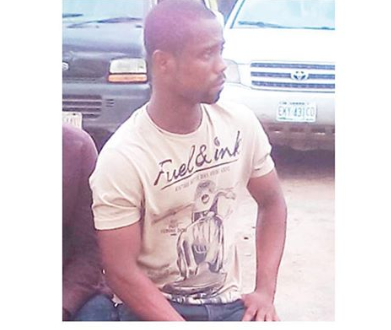 A laundry firm operator, Emeka Chukwuemeka, has revealed how a pastor gave him human blood to drink in order to become a millionaire.

According to reports, Chukwuemeka was arrested by SARS operatives after his neighbors got tired of the stench from his shop on Sunday, at Oregun, Ikeja, Lagos, .

While speaking to newsmen, Emeka said: “I was in my shop, working one fateful day when my friend, Pastor Johnson, came to me. He said that he noticed I had been working as a drycleaner for long, but had made little or no money.

That was how the conversation started. The pastor told me that there were young boys, not up to my age, who made it through the work they did, but also with the support of rituals. He said that I should face reality.

The pastor promised to assist me to overcome all my challenges. He asked me to get N5,000 ready. I rallied round and got the money for him. I didn’t know that what he was going to give me was human blood.

He instructed me to drink the blood for three days, after which I would stop, and then wait for the result. I took it twice, I couldn’t continue. I couldn’t bear the stench of the blood.

But nothing changed in my business after I drank the blood twice. I was planning to dispose the blood when some neighbours started complaining of the stench. This led to my arrest.

Immediately I was arrested, the pastor’s phone line stopped going through.” The state Commissioner of Police, Mr. Imohimi Edgal, said the suspect would be charged to court, while the fleeing pastor would be arrested.